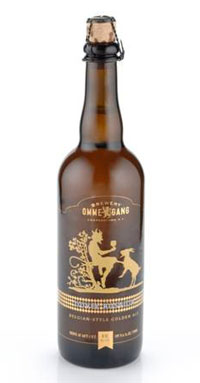 COOPERSTOWN, NY – Brewery Ommegang and Duvel Moortgat are celebrating the release of a long-anticipated collaboration brew named Duvel Rustica. The new beer is a Belgian-style Golden Ale of 8.5% ABV and, like the iconic Duvel Golden Ale, is brewed with fine pils malts and hopped with noble Styrian Golding hops from Slovenia. The collaboration captures the delicate balance of the classic Duvel Belgian Golden Ale – one of the world’s most exalted beers – and adds a touch of the typical rustic fruitiness enhancing every Ommegang ale. This distinctive touch is created by using Ommegang’s proprietary yeast for primary fermentation. The secondary fermentation yeast is also quite interesting, but remains secret.

Phil Leinhart, brewmaster of Brewery Ommegang, says, “In Belgium, Duvel is painstakingly brewed with simple ingredients, yet is a marvelously complex beer that’s never been convincingly duplicated. So, instead of trying to duplicate it, we imagined a charmingly rustic Duvel, brewed in our farmstead brewery in upstate New York. Our idea was to embrace all the distinctive qualities of Duvel, yet bring our own craft-brewing skills to the beer. We honored Duvel’s essence while adding a light touch of Ommegang’s signature yeast-driven fruitiness to the flavors and aromas. To our taste, Duvel Rustica is the pinnacle of brewing collaborations.” Hedwig Neven, brewmaster of Duvel in Belgium, says, “Phil and I dreamed, talked and tasted together all along the way, for almost two yearsÔÇªand I’m proud and delighted with Duvel Rustica, the new American cousin of Duvel.”

Duvel Rustica pours with a radiant golden hue accented by a frothy white head. The body is lean and rounded with effervescent carbonation. The subtle interplay of malt and hops, along with citrus notes from the hops and yeast, creates rich flavors and alluring aromas. The finish offers dry warmth along with solid hop bitterness highlighting the beer’s devilish balance. Duvel Rustica is sold in 750 ML corked bottles and on draft, and is available from October through December, 2012, in all forty-three states where fine Ommegang ales are found.

Brewery Ommegang opened in 1997 to craft-brew fine Belgian-style ales. The brewery creates six ales year-round, as well as an extensive and imaginative range of seasonal and specialty ales. The beers have won a national following by connoisseurs of fine beer and are distributed in over 40 states. Ommegang is located on a 136-acre farmstead in Cooperstown, New York, and offers free daily tours and tastings as well as a 100-seat café and a well-stocked brewery store. Ommegang is open every day of the year except for Christmas Eve Day, Christmas Day, Thanksgiving Day, and New Year’s Day. For more information, please contact info@ommegang.com, call 1-800-544-1809, or visit www.ommegang.com. Ommegang is a member of the Duvel family of fine beers. Follow Ommegang on Twitter (@BreweryOmmegang) and like us on Facebook.