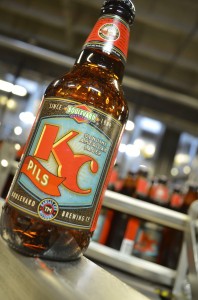 Kansas City, MO — Last month, Boulevard Brewing Company announced that it will begin donating a portion of the revenue from sale of its KC Pils brand to charitable organizations. Today, the company revealed that the American Jazz Museum, KC Pet Project, and Kansas City CARE Clinic will be the first groups to participate in the program.
The brewery recently rebranded Boulevard Pilsner, one of its more popular offerings, to KC Pils, an all-malt lager brewed to honor Kansas City’s rich brewing tradition. Along with the image makeover, the company outlined its intent to donate to area charities a full 10 percent of sales of KC Pils in Greater Kansas City. “We are thrilled to announce the first three recipients,” said Jeremy Ragonese, Director of Marketing for Boulevard. “The work these charities do clearly expresses what 10% for KC is all about. We look forward to working with them to help generate awareness of their important missions.”
The three organizations will benefit from sales of KC Pils from July 1 through September 30. At the end of September, a ten-day online public voting period will determine how the money will be divided, with the top vote getter receiving 60% of available funds and the two runners up each collecting 20%. The process will repeat every three months, so that 12 worthy organizations will receive funding each year. Consumers are invited to visit boulevard.com/weloveKC to nominate area charities for future consideration.
About Boulevard Brewing Company
Boulevard Brewing Company has grown to become one of the largest specialty brewers in the Midwest, dedicated to the craft of producing fresh, flavorful beers using traditional ingredients and the best of both old and new brewing techniques. Boulevard beers are distributed in 25 states and in the District of Columbia. For more information, visit www.boulevard.com, facebook.com/Boulevard, or follow us on Twitter at twitter.com/Boulevard_Beer.