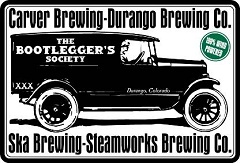 “This Bootlegger’s Pint-for-a-Pint blood drive was the largest in our history of one day blood drives in Durango,” said Charlene Smith of United Blood Services. “This annual blood drive has been growing each year and we thought having a goal to collect 100 units at the 10th anniversary was a great way to commemorate this amazing and fun partnership — and we exceeded our goal.”

According to Smith, of the 72 donors, 36 were first-time donors.

“The average donor gives blood one time per year, so it’s important for us to continue to grow our donor base,” she said.

“Pint-for-a-Pint” encourages fans of Durango’s craft brews to donate a pint of blood and receive a voucher for a pint of beer at their favorite local brewery. The breweries — Carver Brewing, Durango Brewing, Ska Brewing and Steamworks Brewing companies — engage in a friendly “competition” for the benefit of United Blood Services.

“This year all the Bootleggers held preregistration parties the week prior to the official blood drive,” said Brian McEachron, Steamworks co-founder. “It was a great way to generate more interest and raise awareness, and I think it helped get us over our 100 pint goal.”

The Bootleggers originally launched Pint-for-a-Pint in 2003 in response to United Blood Services’ serious need for donors, according to Dave Thibodeau, Ska co-founder.

“Blood was running short and workers were having little success securing donations,” he said. “It didn’t take long for us to conspire and decide a little friendly competition might help raise awareness. We all asked our patrons to donate a pint of blood and, in return, we offered them a pint of beer at their brewery of choice.”

News of the event was picked up by the Associated Press, garnering the Bootleggers national and international attention. Even Jay Leno mentioned Durango and the “beer for blood” drive during one of his opening monologues. The “Pint-for-a-Pint” blood drive has since emerged as a “best practice” and been modeled by blood services organizations throughout the country, according to McEachron.

The Bootleggers have also led the way in the craft brewing industry for collaborative fundraising by establishing the Durango Bootlegger’s Society Fund under the auspices of the Community Foundation of Southwest Colorado. The fund enables tax-deductible donations.

“The fund is a unique situation that helps to cement our philanthropic footprint in Southwest Colorado,” said Thibodeau. “It has become a model for other small breweries/businesses to emulate in other communities across the country.”

“Collectively we’ve always had a desire to help out the people of our communities who have always supported us,” said McEachron, reminding that the Bootleggers’ mission is to raise the awareness and understanding of craft beer by rallying around the needs of the community.

“We give our sincere thanks to everyone who participated in the 2012 Pint-for-a-Pint blood drive and especially to the Bootlegger’s Society and our friends at the American Legion Hall, who donated the space for the blood drive,” said Smith. “The residents of Durango and southwestern Colorado are fortunate to have these four award-winning breweries offering great food and beverages as well as the fact that the breweries formed the Bootlegger’s Society, which gives back to the community.”

For further information regarding the Community Foundation of Southwest Colorado, or to contribute to the Bootlegger’s Society Fund on-line, visit www.swcommunityfoundation.org.