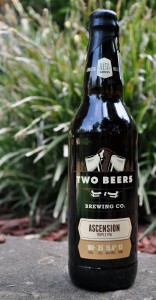 SEATTLE (May 9, 2013) — Two Beers Brewing has announced the second beer to join the ranks as part of the growing Seattle brewery’s new limited edition Alta Series. Ascension Triple IPA, a powerful yet balanced beer ringing in at 15.4 percent ABV and 100+ IBUs, will be released at the Two Beers Brewing tasting room, The Woods, on Saturday, May 18 at 11 am. Just as with the release of Two Beers Brewing’s Switchback Russian Imperial Stout — the first beer of the Alta Series, which sold out in just one week — only 1,000 bottles of this coveted beer will be available for purchase.

“When we first released Ascension as the flagship beer for the Seattle International Beerfest last year, people couldn’t believe a beer so high in alcohol could be so well balanced and approachable,” stated Joel VandenBrink, founder and head brewer at Two Beers Brewing Co. “It was only available that one weekend last summer and we’ve been receiving requests to bring it back ever since. The launch of our Alta Series provided us the perfect opportunity to do so, as well as give this unique beer the attention it deserves.”

Aged for eight months in stainless steel, Ascension Triple IPA is Two Beers Brewing’s most powerful beer yet. Offering a 15.4 percent ABV and 100+ IBUs, Ascension is a true Triple IPA utilizing triple the amount of hops as needed for the brewery’s Evolutionary (Evo) IPA, the recipe for which acts as the base for this delicious beer. While high in alcohol, Ascension is deceptively well balanced and smooth, featuring a moderately sweet palate with strong notes of caramel and citrus, including grapefruit, passion fruit and tangerine.

As a special bonus, May 18 will also mark the release of Two Beers Brewing’s first sour beer, Flanders Brown Sour Ale. Featuring a base of the brewery’s popular Hearth Winter Warmer re-fermented with Lacto, the Flanders Brown Sour Ale offers a nose of cinnamon and nutmeg, complemented by a unique palate of cinnamon, clove, nutmeg, oak and allspice. This limited release beer — featuring 30 IBUs and an 8.7 percent ABV — will be available only in 22-ounce bottles.

Craft beer enthusiasts can purchase 22-ounce bottles of Ascension Triple IPA for $14 each (limit six per customer) on Saturday, May 18 beginning at 11 am at The Woods tasting room, one week before they are released to Seattle-area retailers and bottle shops. Five-ounce tasters will be available for $7 each. Bottles of Flanders Brown Sour Ale will be available for $8 each. Attendees of the Ascension launch party will also enjoy a special lineup of Two Beers Brewing beers on tap, including barrel-aged Evo IPA, barrel-aged SoDo Brown and limited edition Prosperity IPA, as well as nine additional seasonal and year round offerings. Last but not least, popular food truck Evolution Revolution will be on site serving up delicious New American street food.

Featuring four bold, complex ales – each reaching above 9.0 percent ABV and boasting its own distinct personality – Two Beers Brewing Alta Series is designed to offer a unique twist with every sip. Whether its the complexity obtained by aging in brandy barrels, the tartness imparted by fresh fruits or unique twist provided by a complex blend of spices, the Alta Series sets out to distinguish itself from the others and reach the upper limits. In addition to a new look for the growing Seattle microbrewery, including screen-printed bottles and a hand-dipped wax seal, each bottle is signed and individually numbered by the very person who bottled it. The final two beers in the series are scheduled for release in August and November, with Switchback Russian Imperial Stout making its return February 2014.

Two Beers Brewing Co. — makers of Evolutionary IPA and a host of Northwest-inspired beers — began operations in a small Seattle basement in 2007. Today, Two Beers Brewing produces twelve unique beers including five year-round, seven seasonals and a host of intricate infusions in its 4,800-square-foot SoDo brewery. Two Beers Brewing can be found in Seattle-area bars and restaurants, with tastings kegs and growler fill-ups available at their tasting room located at 4700 Ohio Ave. S. in SoDo, open weekly Tuesday — Friday from 3 p.m. to 8 p.m. and Saturdays from 1 — 6 p.m. Select brews can also be found in 22-ounce bottles and 12-ounce cans through the tasting room, as well as local retailers in Washington, Oregon, Alaska, Vancouver and Northern Idaho. For more information, visit www.twobeersbrewery.com.