It’s a party eight years in the making, and we want to thank our loyal fans with a bash!

It’s a party eight years in the making, and we want to thank our loyal fans with a bash!

First up: not one… not two… but THREE CAN RELEASES:

The Shower, Sweet and Sour Cranberry Ale: Whenever we've had our beloved cranberry shandy The Bog on tap at the same time as our OG sour beer Tower 23, mixing equal parts of the two became a fan-favorite pour behind the bar. The sour and sweet combination is too delicious to pass up, and we've brought you The Shower: a perfect blend of two of our favorite brews. Shandy + Tower = Shower!

And Tan Limes returns! Our Mexican-style Lager brewed with a touch of local Cape May Sea Salt and a hint of Persian lime juice was such a hit when we released it in May that we’re bringing it back. Fresh and zesty, Tan Limes would be perfectly at home at your local cantina and is best paired with street tacos, brilliant sunshine, and close friends.

Be sure to grab a specialty flight: Anniversary Ale 8, The Shower, Tan Limes, and Cape May Lager -- you can get it with our new lager wheat glass!

In addition, each of our co-founders have devised a one-off. Check out Ryan’s Arnold Palmer Crush -- an IPA with black tea and lemonade. And you won’t want to miss Hank’s pickle sour -- a kettle soured wheat ale with pickle spices. And Mop Man asked us to serve up some Shower Slushies in a color-changing cup! We’ll be tapping these bad boys at 2pm.

At 11am, you’ll find our Birthday Cake cask on the Beer Engine -- Anniversary Ale 8 with lactose, vanilla, cotton candy, and brown sugar, with a special prize if you kick the cask! Since the traditional 8th anniversary gift is pottery, for a prize you’ll receive one of our new earthenware mugs! This 16-ounce mug is made by hand by the good people at Sunset Hill Stoneware using carefully sourced clay, beautiful glazes, and a killer medallion based on our old-school logo. Dishwasher, microwave, and oven safe, this bad boy is perfect for beer or coffee or the tears of your enemies.

One of our biggest initiatives of the year, BikeMS: City to Shore, will be here before you know it! Each year, we sponsor a team to raise money for Multiple Sclerosis research. There’ll be representatives from BikeMS to collect donations and you can sign up for the ride with a 15% discount!

And we’ll have door prizes -- you might win a limited-edition Cape May Lager flag! -- and unique ‘Gram-worthy photo stations to help capture your memories of our birthday celebrations!

It’s shaping up to be a great day! Then, when it’s done, head over and continue the fun for our party at Cabanas! 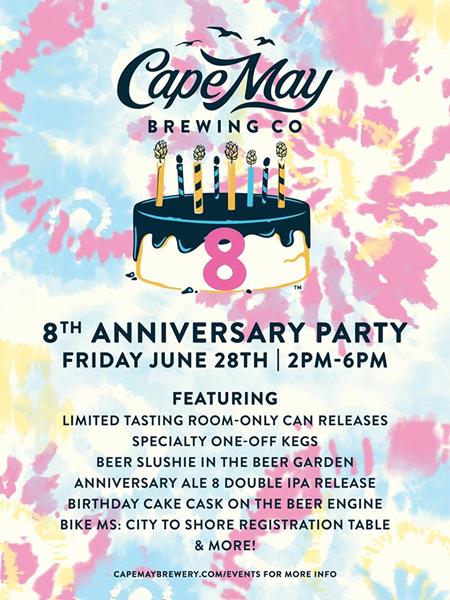