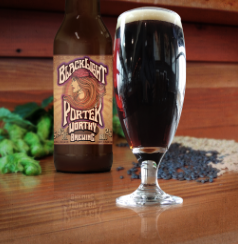 Bend, Oregon – After a very successful draft-only release in early January 2014, Worthy Brewing Company is adding Black Light Porter to their line-up of draft and 22 oz bottles in early April 2014.

Black Light Porter comes in at 5.7% ABV with 37 IBUs and an unmatched chocolately smoothness. In the spirit of making things pop, brewmaster Chad Kennedy added bittersweet, high altitude, Ecuadorian dark cacao nibs to the medium-bodied mahogany colored porter. The nibs do to the brain what the UV light from the black light does to the fluorescent paints — they generate a 3D glow that expands and uplifts.The release of 22 ounce bottles and kegs will be distributed by Columbia Distribution in Oregon and Washington and by Hayden Beverage in Idaho.

Worthy Brewing Company opened its doors in Bend, Oregon in early 2013. Within its first year, a canning line, bottling line, expanded fermentation space, a kitchen expansion and an addition of a five barrel pilot brew system were completed. Worthy also boasts a greenhouse and hop yard onsite for growing estate and experimental hops in conjunction with Oregon State University and Indie Hops.