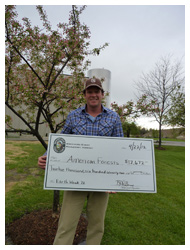 The news of Williams’ exit comes about 16 months after Vermont Hard Cider — maker of Woodchuck Hard Cider — was acquired by the C&C Group for $305 million.

“After 18 years with Vermont Hard Cider Company, LLC current President and CEO Bret Williams has made the decision to step down from his post effective March 1, 2014,” the company wrote in a statement. “Bret will stay on the company’s board of directors and remain involved in strategy decisions moving forward.”

Since taking over the company in 2003, Williams helped to build Vermont Hard Cider into one of the largest cider makers in the U.S. The company sold about four million cases of cider in 2012, three million of which came from the Woodchuck brand family.

But following the acquisition by C&C, company-wide said sales went flat in 2013, according to a spokesman with the company. Prior to the acquisition, Vermont Hard Cider had reached an agreement with Heineken to transition its import rights to the Strongbow brand. Once Vermont Hard Cider was fully incorporated into C&C, it was able to handle sales of the Magner’s and Hornsby’s brands.

Vermont Hard Cider has chalked up last year’s slower sales to the transition, as distribution rights to the Strongbow, Magner’s and Hornsby’s brands were changing hands between wholesalers across the country, slowing growth.

The first four weeks of 2014 haven’t been kind to C&C either. Volumes sales for the entire portfolio were down 12.3 percent in multi-outlet and c-store retailers, according to IRI.

Meanwhile, as the company works on appointing a successor, current CFO and COO Dan Rowell has been appointed the interim CEO.

“Dan has been with the company since 1996, working alongside Bret through the years,” the company wrote in its statement. “Dan also serves on the board of directors and is positioned well to build on Bret’s success. VTHCC remains very committed to the cider category and growing it from our home of Vermont.”