ANAHEIM, CA – In celebration of their 3rd year in business, The Bruery will be hosting an anniversary party on May 29th and The Phoenix Club in Anaheim.

This year, they are collaborating with brewbound.com to offer two lucky individuals the chance to attend as VIP’s… for free! (details below). 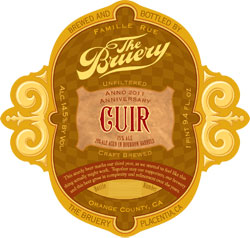 The Bruery was kind enough to giveaway a pair of VIP tickets, for either session (10:30 am-2:00 pm or 3:30 pm-7:00 pm). The tickets will gain you access to limited release beer pours (including Cuir) in the VIP area as well as a commemorative glass to take home.

If you would like a chance to win a pair of VIP tickets, just follow these steps to enter:

The contest begins now and will end May 20th. This post will be reposted to ensure that multiple fans have the chance to enter. Please only enter once or you will be disqualified.

ÔÇóThe general admission ticket includes a souvenir glass and 10 four oz. tasters.
ÔÇóThe VIP admission tickets are limited and include a souvenir glass, 10 four oz tasters and three tastings of our Limited Release beers which will be poured in a separate VIP area.
ÔÇóMore tasting tickets will be available for purchase at the event.
ÔÇóFood will be available for purchse from The Phoenix Club at stations around the festival.
ÔÇóThe Bruery Provisions will be providing cheese and snack stations.
ÔÇóTo alleviate lines, we will have hard tickets for this event, allowing for quick entry, and we will be recruiting a large number of volunteers to man the multitude of Bruery beer stations on top of the many guest beer stations and food stations.

You can also purchase tickets and get more information on The Bruery website.