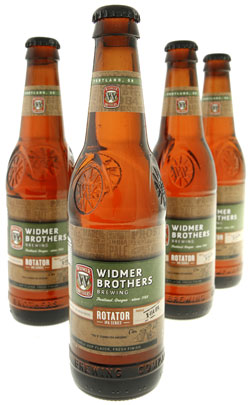 PORTLAND, OR – Widmer Brother Brewing launches its Rotator IPA series with the release of X-114 India Pale Ale. The first beer in the series of IPA’s, X-114 was handcrafted by the Widmer Brother’ brewing team. X-114 is available in limited quantities on draught and in sex-packs at select retailers nationwide.

“Our Rotator IPA series was born out of our brewing team’s desire to experiment with and enthusiasm for the IPA style of beer,” said Rob Widmer. “Our brewers are passionate about creating unique interpretations of beer styles and always finding ways to do things a bit differently. X-114 is an aromatic IPA that originated from the experimental hop that we now call Citra. It’s a great drinkable beer and is the perfect brew to kick off this series.”

X-114 IPA is an aromatic IPA made from Citra hops that balance perfect proportions of big fruit and citrus flavor with hints of peppery spice, caramel malt sweetness and a bitter, but smooth finish.

X-114 IPA is an aromatic IPA made from Citra hops, which balance perfect proportions of big fruit and citrus flavor with hints of peppery spice. This beer pairs well with citrus flavors and lighter fate such as seafood.

About the Rotator Series

Widmer Brothers’ Rotator Series will feature an ever-changing offering of different IPA brews. The series was developed to showcase the Widmer Brothers brewers’ penchant for experimentation and to give lots of latitude for innovation within the broad IPA style. X-114 IPA is the first in the series to be released. Rotator Series beers will be available in limited quantities and are only available while supplies last. Widmer Brothers’ brewers will handcraft each IPA sequentially. The second beer of the series is expected to hit shelves sometime during the summer of 2011.