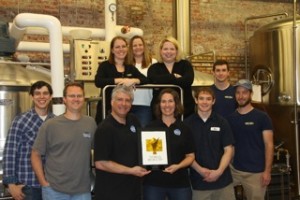 Wake Forest, NC — White Street Brewing Co. claimed a gold award in the 2014 World Beer Cup, a global beer competition that evaluates beers from around the world and recognizes the most outstanding brewers and their beers.

Gold, silver and bronze awards in the competition’s 94 beer style categories were presented April 11, 2014 during the World Beer Cup award ceremony at the Hyatt Regency in Denver, Colorado.

White Street Brewing Co. was awarded a gold award in the Kolsch beer style category for its Kolsch-style Ale, a crisp and refreshing ale with hints of pear and melon on the nose and palate. White Street Brewing Co. is a 3000-bbl microbrewery located in Wake Forest, North Carolina that specializes in handcrafted small-batch ales and lagers. The brew staff consists of Ian VanGundy, Barrett Williams, and Michael Stanley.

“To win an international competition in a non-American style category is really something special. With a beer like our Kolsch-Style Ale, there are not a lot of hops or malts to hide behind — it has to be a very well made beer. It’s a perfect example of how we brew all of our beers — with attention to detail.” said Dino Radosta, President of White Street Brewing Company.

World Beer Cup winners were selected by an international panel of 219 beer judges from 31 countries. Regarded as the “Olympics of Beer Competition,” the World Beer Cup saw an impressive field of 4,754 entries from 1,403 breweries in 58 countries.

Presented by the Brewers Association, the World Beer Cup has been held every other year since 1996, to celebrate the art and science of brewing by recognizing outstanding achievement. For more additional information, visit the World Beer Cup website.

White Street Brewing Co., a family-friendly neighborhood brewery, opened its doors in September 2012 as Wake Forest’s first brewery. Built in the 1930’s as a Chevrolet car dealership, the building was renovated into a distinctive beer manufacturing facility focused on true to style ales. We’re so proud of our impressive brewhouse that it’s in full view for all to see. Our quality and commitment are equal to the big brewers, but with us you get small-town charm combined with an “everybody knows your name” atmosphere. Our historic downtown location is a gathering place for beer enthusiasts and novices alike. Come into our brewery and witness small-batch beer production at its best. Our on-site taproom, open seven days a week, has a seat waiting for you and a pint or growler ready to pour. To learn more visit us at www.whitestreetbrewing.com or on Facebook at https://www.facebook.com/WhiteStreetBrewing