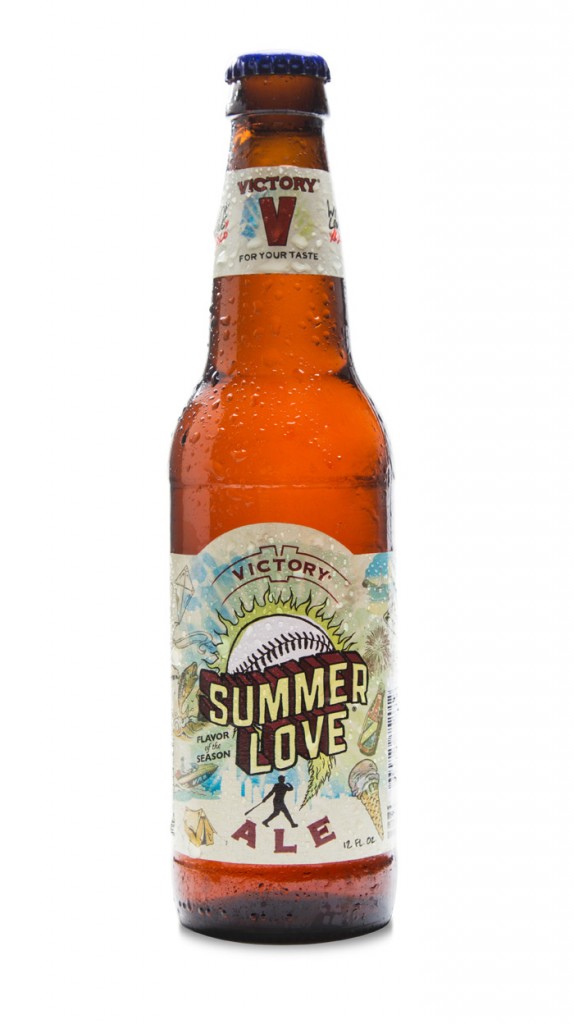 DOWNINGTOWN, PA — Philadelphia area based Victory Brewing Company’s┬« (Victory) highly sought after seasonal brew, Summer Love Ale┬«, now in its fourth year, is back by popular demand. In this season of nostalgic pursuits and patriotism throughout the country, this brew is dedicated to where our nation and Victory’s roots began, representing the freshness, fun and great summer memories everywhere summer is celebrated, but especially in our City of Brotherly Love.

“In 2010, Visit PhiladelphiaTM commissioned us to capture the essence of Philadelphia, and now Summer Love is one of our most anticipated, popular brews for a very good reason,” said Victory’s President and Brewmaster, Bill Covaleski. “Its golden color and refreshing taste bottles the spirit and fun of the season so many of us associate with our best memories—BBQs, baseball, fireworks, when summer lasted forever.”

Summer Love Ale, at 5.2% alcohol by volume, promises the sublime, earthy familiarity of noble European hops backed by fresh, clean German malts, and a surprising burst of lemony refreshment from fistfuls of American whole flower hops at its finish.

Victory’s commitment to this great brew and the city it represents doesn’t stop with the liquid. For the third straight year, Victory will host the Find Your Summer Love sweepstakes. This year, partnering with Visit Philadelphia, the sweepstakes will offer fans the chance to Taste Victory’s Summer Love Ale and celebrate Fourth of July in Philadelphia.

“What better place to see fireworks, drink great beer and celebrate the summer than in the city that throws the biggest party for our nation’s birthday!” Covaleski continued. “We’re thrilled to work with Visit Philadelphia to offer fans a chance to ‘find their summer love’ where we found ours.”

Fans can enter to win this prize package, which is valued at $1,450 and includes airfare for two, two nights stay at Hotel Monaco and more, and read the official sweepstakes rules at www.victorybeer.com/fysl.

Summer Love Ale will be available through the end of August, much like those dog days of summer. You can find your “Summer Love” in many major grocery stores, including most Whole Foods Markets and Wegmans locations along the East Coast, bottle shops and beer distributors, as well as many craft beer bars throughout the country. Use Victory’s Beerfinder to locate Summer Love Ale near you.

Victory Brewing Company is a privately held craft brewery headquartered in Downingtown, Pennsylvania. Begun by Bill Covaleski and Ron Barchet, childhood friends who met on a school bus in 1973, the brewery formally began operations in February of 1996. Victory, Pennsylvania’s widely acclaimed brewery and restaurant, now serves fans of fully flavored beers in 34 states with innovative beers melding European ingredients and technology with American creativity. To learn more about Victory Brewing Company visit us on the web at www.victorybeer.com.