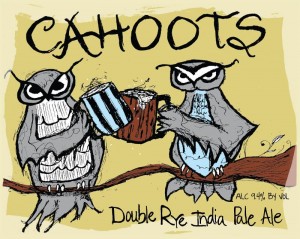 Uinta developed the idea for an annual limited release brand, one that would rotate in beer style and, more importantly, feature a collaboration recipe. In the summer of 2012, Uinta head brewer Kevin Ely in cahoots with (see what they did there?) Chris Detrick, began the research and development process for Uinta’s first Cahoots. Together, Detrick and Uinta developed a Double Rye IPA, a bigger, bolder, hoppier version of Detrick’s award winning Rye IPA recipe.

Two types of malted rye and loads of malted barley combine with CTZ and Chinook hop varieties to create this subtly spicy and distinctly hoppy beer. Bold and rich, Cahoots Double Rye IPA is bottle conditioned and has an ABV of 9.4%. Scheduled to hit select shelves in early June, Cahoots is a limited release beer, only 120bbls were produced.

Keeping with Uinta’s Crooked Line tradition of supporting local art talent, the Cahoots’ label, which depicts two perched owls toasting, was produced by Andy Chase, a local Salt Lake City artist. This is the first time Uinta has collaborated with Chase for a Crooked Line label.

Uinta Brewing Company embarked upon its mission of brewing world class, full-flavored, craft-brewed beer in 1993. Uinta Brewing is named after an east-west mountain range located in northeastern Utah. Many of Uinta’s beer names are inspired by Utah’s diverse landscapes or have historical significance. Uinta has broadened its market and can be found in 24states from coast-to-coast, and has even ventured to other countries around the world. Uinta is committed to brewing world-class beer using the best practices and ingredients.