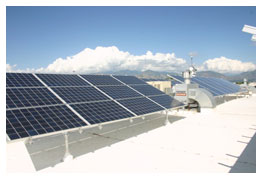 SALT LAKE CITY – In an effort to continue their commitment to using renewable resources, Uinta Brewing Company has recently installed solar-electric paneling on the brewery’s roof. At this time 126 Schott 235 watt modules panels have been installed, allowing up to 30KW of electrical power to be generated for Uinta’s beer production—roughly 15% of the brewery’s power usage.

In 2001, Uinta became the first Utah business to become 100% Wind Powered; investment in solar energy is an extension of Uinta’s commitment to the environment and the Salt Lake community. Uinta’s power will now be 85% Wind and 15% Solar.

Also, in hopes of bringing due awareness to the importance of using renewable energy and the conservation of all forms of energy, Uinta has installed a digital monitor in the brewery’s foyer, which will display both the amount of energy Uinta is currently using, as well as how much power the solar panels are generating for the brewery.

Uinta hopes to continually find new ways of taking steps within the brewery to conserve energy, thereby setting an example in the Salt Lake business community. In addition to the solar panels, Uinta installed “t8” lighting throughout the brewery. This form of lighting emits the same amount of light, while using only half the power required to illuminate the space.