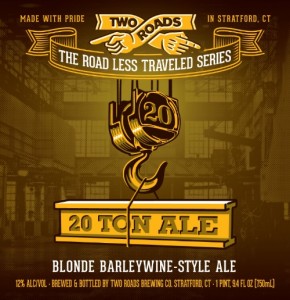 When Two Roads moved into the former home of the US Baird Automatic Machine facility in March of 2012 and turned a 100-year-old factory building into their brewery, it came with a “bonus” feature: a 20-ton overhead crane and hook!

This very crane is featured on Two Roads beers’ labels and can still be seen at the brewery. Although not fully operational due to the brewing equipment, the hook is used from time to time to hoist barrels of beer up to the second floor tasting room.

This beer honors that hefty inheritance. 20 Ton Ale is a unique strong ale that Two Roads describes as a blonde barleywine. A behomoth of a beer, it’s brewed with Golden Promise (known for its distinct vanilla biscuit character) malt and generously hopped with a blend of both cutting-edge and classic hop varieties. The result is a decidedly fruity and piney heavyweight brew clocking in at 12% alcohol and loaded with plenty of hop character that makes it enjoyable upon release or after aging in a cool cellar.

Two Roads opened its doors in December 2012 having earlier acquired and renovated a 100 year old vacant, brick factory building in Stratford Ct.  Its name and philosophy are inspired by the Robert Frost Poem “The Road Less Taken”—a philosophy brought to life in the beers they create using state-of-the-art brewing and packaging equipment.  Two Roads Brewery is open for tastings Tuesday-Sundayand tours Friday-Sunday.  For more information go to www.tworoadsbrewing.com