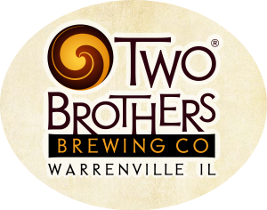 Warrenville, Ill.—Two Brothers Brewing Company is pleased to announce that donations totaling $12,000 were made to the Hundred Club of DuPage County through sales of the Kolsch style beer, Engine No.1.

“The Club offers assistance to families of law enforcement and firefighting personnel who have been killed, injured, or otherwise stricken while residing or working in the county. The members of the Hundred Club show the men and women who serve and protect us, that their sacrifices, their lives, and their families are important to us,” according to the Hundred Club of DuPage County’s official website.

“We wanted to give back to our local community,” explains Jason Ebel, co-owner of Two Brothers Brewing Company. The partnership between Two Brothers and the Hundred Club began In March 2014 when the Warrenville Fire Department approached the brothers with the idea of brewing a beer to celebrate the Fire Department’s 75th anniversary.

“It was an easy decision for us. Warrenville has been a great city to partner with, we have enjoyed working with our community leaders over the last 18 years,” says Ebel, “We are honored to know that we made such a meaningful contribution with the help of our surrounding communities.”