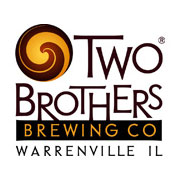 WARRENVILLE, IL — For the first time in six years Two Brothers Brewing Company is expanding their distribution footprint to a brand new market. Cavalier Distributing, the highly respected specialty beer distributor based in Ohio and Indiana, has opened a new distribution facility in Lakeland, Florida and Two Brothers Brewing Company is thrilled to be a part of this new expansion.

“Two Brothers Brewing Company is excited to have expanded the brewery enough to allow for a new market and the opportunity to work with Cavalier Distributing made Florida an easy choice for our expansion,” says co-owner Jason Ebel.

Florida is a new landing spot for craft beer and the recent shift in sales to the craft market has peeked interests for many breweries. Two Brothers Brewing Company currently distributes in five markets and is experiencing growth of more than 40% in 2012.

Two Brothers Brewing Company is now poised to bring their highly regarded craft beers to the south. Year after year Two Brothers Brewing Company had been investing in the efficiency of their brewery and after years of continued plant expansions, a new state-of-the-art bottling line is now being built to keep up with demand. This new bottling line will be fully operational in mid-2013 which will continue their expansion in other key craft beer markets and to supply the pan handle state with bottles of some of the most unique and compelling craft beer the Midwest has to offer.

As long time partners with Cavalier Distributing, Two Brothers Brewing Company is looking forward to furthering their relationship as both companies continue to lead in the craft beer movement.

The Two Brothers Brewery is owned by brothers Jim and Jason Ebel who developed a passion for flavorful specialty beers while living in Europe. After returning to the states, they had trouble finding craft beers in Chicago so they opened Two Brothers Brewing Company in 1996. The brewery resides in a 40,000 square foot facility 30 miles west of Chicago in Warrenville, IL. After 15 years of providing great craft beer to the Chicagoland area, they still seem to be continuously expanding. Their newest venture is 2011 opening of the Two Brothers Roundhouse restaurant and brewery in Aurora, IL.