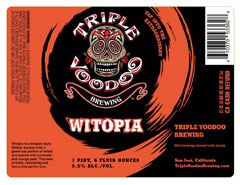 Witopia is brewed with generous portions of wheat and spiced with coriander, orange peel, and ginger. The addition of the ginger adds subtle spice notes and helps balance out the other spices. ABV clocks in at a modest 5.5% making this a very easy drinking beer. Look for Witopia on draft before the end of October and in 22oz bottles before the end of November.

Last month, Triple Voodoo Brewing launched the first beer in our “barrel aged” serious. This was our Grand Cru aged in a Buffalo Trace bourbon barrel for three months. This beer was done in collaboration with a San Francisco beer and spirits shop and only 19 cases were produced.

The next offering in the series will be a barrel aged version of our Inception Belgian Triple. This will also be aged in a Buffalo Trace barrel for two months. Look for this beer to be released in very limited quantities around mid-November.

We are excited about the response we are getting for our first barrel aged beers and are looking to expand our barrel program in 2013.