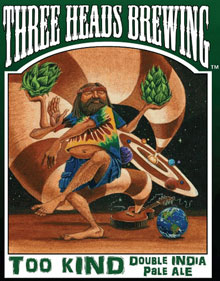 ROCHESTER, NY — Three Heads Brewing (3HB) is beyond proud to release their first beer of 2013, Too Kind Double India Pale Ale. Too Kind is based on their best selling flagship beer, The Kind, and marks the eleventh beer overall for the Rochester, NY-based brewer.

“As you know, we love our hops,” beams Dan Nothnagle, President and Beer Architect for Three Heads Brewing. “The next logical step in our Pursuit of Hoppiness was to create a double IPA.”

Too Kind reveals a crush of sublime aromatics, hops and sweet fruity tones ablaze, rich but pleasant. Further exploration reveals the strength of the double: a hearty mouth, with hops rolling over hops. But what truly rewards the drinker are the unexpected, smooth lemon and melon notes that balance the stature of this big pour. For a beer that comes in at 8.5% ABV and 87 IBU, Too Kind finds harmony in both the bold and the serene.

“Our thoughts were to take everything that we like about The Kind IPA,” adds Nothnagle, “and basically jack that up to 11.”

While Too Kind does owe much to its namesake, this double IPA showcases a brand new Oregon hop variety called Meridian. Introduced to the market less than a year ago, Meridian has quickly impressed brewers with its sweet aromatics and fruity tones.

“We didn’t want to use exactly the same hops that are in The Kind or to just utilize the old standbys,” Nothnagle notes. “It (Meridian) is an amazing variety with incredible aroma and flavors.”

Three Heads Brewing will officially launch Too Kind DOUBLE IPA at Homegrown II, the annual celebration of Rochester area beer, food, and music, on Saturday, January 12th at Lovin’ Cup Bistro in Rochester, NY. The all-day event will feature Too Kind as well as a variety of other specials selections from Three Heads. Homegrown II also highlights the offerings of other Rochester brewers, as well as area restaurants, artisans, and a full slate of the best local music.

Too Kind marks the fourth India Pale Ale released by Three Heads Brewing, following The Kind, Skunk Black IPA, and their recently rereleased Ontario Coast Belgian IPA. Too Kind will soon be available at all your favorite pubs, restaurants, and grocers that graciously carry 3HB beer.

“The goal of Three Heads Brewing has always been to bring great beer to the people of Western NY and beyond. Enjoy!”

For more information on Homegrown II, visit the Lovin’ Cup website at LovinCup.com or Homegrown II on Facebook.