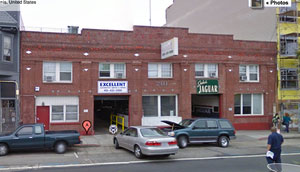 A former auto garage (John’s Jaguars) this beautiful brick building will soon hold three retail spaces with us occupying the center and largest of them.Through the summer and fall, we will turn this 3000-sq feet space into The Abbot’s Cellar, a high-end craft beer focused restaurant.

The Abbot’s Cellar, seating around 100 and able to take reservations, will highlight the emphasis we place on pairings with a real marriage between the food and the beer programs. The kitchen focal point will be a brick hearth, and the food menu will feature a daily, changing menu of gourmet American and European fare with a strong emphasis on locally and sustainably sourced products.

Drafts will number around 24, drawn through mostly traditional American style draft lines with at least two cask-beer hand pump engines. All beers will be served at their proper temperature (stored in different temp coolers depending on the style), and will be served from glassware stored on the back bar shelves, as is done at the Monk’s Kettle.

Abbot’s will also feature a vast and ever-evolving selection of bottled beers specifically designed for a more frequently changing menu. The bottle list will contain over 100 selections including vintage offerings from the cellar, with 8-10 daily rotating glass pour selections that will be highlighted in the daily pre-fixe menu and the flights offered.

Lundberg Design, famed for its work with Slanted Door, will be overseeing architectural design that will feature exposed brick, 24-foot wood ceilings, floor to ceiling wooden beams and supporting trusses, as well as several skylights. The design plans will naturally include a beer cellar located on the restaurant floor.

Located just two and half blocks from The Monk’s Kettle, the two venues will have a sister relationship, with Monk’s Kettle as the neighborhood tavern, and Abbot’s Cellar as the fine dining restaurant.