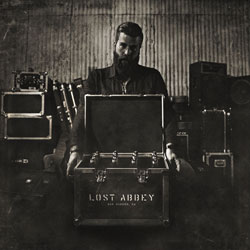 SAN MARCOS, CA — Don’t turn up the house lights yet, because The Lost Abbey is returning to the stage with a grand finale to its multi-award-winning Ultimate Box Set. This Saturday, December 1, 2012, The Lost Abbey will release a previously un-announced 13th beer, aptly inspired by the 1979 hit “Message in a Bottle” by the Police. On the same day, the brewery will also make available a select number of Ultimate Box Set Collector’s Editions for purchase by the public on a first-come, first-serve basis.

“When we began the Box Set releases last January our plan was to release a bonus track and make a number of complete sets available to the general public at the end of the year,” said director of brewery operations Tomme Arthur. “But as the months progressed we began to worry that the demand was beyond our production levels and we weren’t going to be able to deliver complete sets to both those who reserved them during the year and have some left for the public in December. As a result we opted to make the sets available only to those who reserved them.”

The complete box sets were released to the winners this past weekend at a special party that let the winners go “backstage” at the brewery to meet Arthur and the other members of The Lost Abbey team.

“As luck would have it, between higher than anticipated yields on each Track, and some of the lottery winners opting to take less than their full entitlement, we can release a limited number of the complete Box Sets the general public,” Arthur said.

The Collector’s Edition Box Sets include all 13 beers released throughout the year, a hand-built and individually numbered Lost Abbey road case, and an album-style book created by Grammy┬« Award-winning designer Matt Taylor of Varnish Studio. The book includes detailed descriptions of each Track, album cover art for each beer’s label, “liner notes” from Arthur, and a faux The Lost Abbey vinyl record.

Individual bottles of Track 13 and the complete Box Set Collector’s editions will go on sale in The Lost Abbey tasting room at 10am PST December 1, 2012. A total of 350 bottles of Track 13 will be available for purchase and must be consumed in the tasting room. At the time of this release, the total number of complete Box Sets available for public purchase this weekend is still being determined. However, the final amount will extremely limited and available strictly on a first-come, first-serve basis.

Founded in 2006, Port Brewing and The Lost Abbey produces an extensive line-up of award-winning ales and lagers. Under the direction of legendary brewmaster and co-founder Tomme Arthur, the brewery was named 2007 Great American Beer Festival Small Brewery of the Year, and 2008 World Beer Cup Champion Small Brewery. The company’s beers, many of which are aged in oak barrels for 12 months or longer, are universally recognized for their complexity, unique flavors, and bold, boundary-pushing styles. For more information, contact Port Brewing / The Lost Abbey at 155 Mata Way, Suite 104, San Marcos, CA 92069, telephone (800) 918-6816, and on the web at www.lostabbey.com.