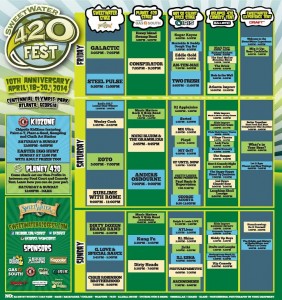 ATLANTA — Patrons can now nail down daily plans for the weekend of April 18-20 as SweetWater 420 Festival announces its 10th anniversary day-by-day schedule. The rundown, listed below, gives folks a glance at the 411 on performances, activities, panels and standup acts taking place throughout the three-day festival. Click here for a detailed listing of performance times.

Tickets are available for pre-purchase at www.sweetwater420fest.com and include 3-Day Weekend Passes at $18 and 3-Day VIP Passes at $135. Folks making the trip from out of town can take advantage of specially discounted rates from Embassy Suites, located just steps from Centennial Olympic Park, through April 14 or until rooms sell out.

SweetWater 420 Festival is a Happy Ending Productions event. For more information, please visit www.sweetwater420fest.com, follow us on Twitterand Instagram @420fest, or become a fan on Facebook at www.facebook.com/420fest.

SweetWater Brewing Company is an AtlantaÔÇÉbased craft brewery living by the motto “Don’t Float the Mainstream!” Distribution is limited to the Southeast as SweetWater’s brews are designed to be consumed fresh. The awardÔÇÉwinning lineup of yearÔÇÉround beers includes SweetWater 420, IPA, Blue, LowRYEder and Georgia Brown. SweetWater also features a Catch and Release series of beers available on a limited basis throughout the year, and an experimental, oneÔÇÉtimeÔÇÉonly Dank Tank series. SweetWater Brewery — located at 195 Ottley Dr. in Atlanta — is open for tours everyWednesday, Thursday and Friday from 5:30ÔÇÉ7:30 p.m., as well as Saturdays and Sundays from 2:30ÔÇÉ4:30 p.m. For more information about SweetWater Brewing Company, please visit www.sweetwaterbrew.com. Hang out with your social thang out and follow SweetWater Brewing Company on Twitter/Instagram @sweetwaterbrew, or become a fan on Facebook at facebook.com/sweetwaterbrew.