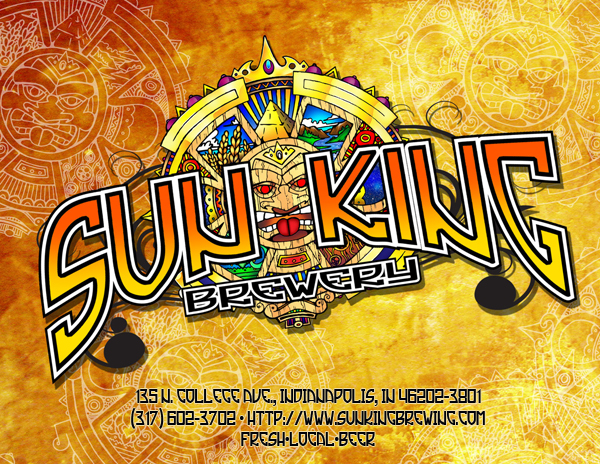 INDIANAPOLIS — On Saturday, July 13th the Brewers of Indiana Guild in conjunction with the Indiana State Fair hosted the 13th annual Indiana Brewers Cup. Professional and home brewers alike from all over Indiana and across the country submitted 1,400 beers to the competition.

60+ BJCP (Beer Judge Certification Program) judges from throughout the Midwest put in an exhausting effort to judge beers in 23 separate categories and award Gold, Silver, and Bronze medals to the winners.

Sun King earned the title of Champion Brewery, more commonly referred to as Indiana Brewery of the Year, after receiving the most points of the 31 professional breweries entered in the 23 different categories of beer, which included four first-place beers. Gold medals were awarded for Wee Mac Scottish Ale, Velvet Fog, Stupid Sexy Flanders, and Maibock. A Silver medal was awarded for Sunlight Cream Ale and two Bronze medals were awarded for Osiris Pale Ale and Popcorn Pilsner.

“We’re honored to have earned this award, said Dave Colt, Sun King owner and head brewer. “We work hard to make great beer and it’s always nice when a qualified panel of judges recognizes your efforts.”

More than 80 judges from all over the country tasted and rated the beers over two days. Silver and bronze medals were also awarded in each of the categories, which range from American Ales to Spice/Herb/Vegetable beer. All the winning beers will be on display in the DuPont Food Pavilion during the Indiana State Fair, Aug. 2 — 18.

About Sun King Brewing Company
Sun King Brewing Company is the brainchild of Dave Colt and Clay Robinson. With the help of family and friends — Omar Robinson, Andy Fagg and Steve Koers — the first keg of Sun King beer rolled out the door for delivery in July 2009. Now available on tap and in cans at hundreds of locations around central Indiana, Sun King has grown into the second-largest beer brewer in the state of Indiana. The company’s commitment to handcrafted seasonal and specialty beers has been rewarded with multiple medals at the Indiana Brewers Cup, Great American Beer Festival and World Beer Cup competitions.

About The Indiana State Fair
The Indiana State Fair is the state’s largest multi-day event celebrating Hoosiers’ spirit and agricultural heritage. Nationally recognized for offering great entertainment, showcasing youth, interactive agriculture education programs, premiere facilities and a variety of unique, fun foods, the Indiana State Fair has been an annual tradition for generations of Hoosiers since 1852. The 2013 fair boasts “Fun at Every Turn” and is celebrating the “Year of Popcorn” presented by Weaver Popcorn Company.

About Brewers of Indiana Guild
The Brewers of Indiana Guild (B.I.G.) was organized to provide a unifying voice for the craft brewers and brewpubs of Indiana. Its goal is to promote public awareness and appreciation for the quality and variety of beer produced in Indiana. Through economic development, academic research, and educational programs, B.I.G. brings benefits to a larger community than just its members. B.I.G. works closely with local farmers, grocers, and restaurants to promote locally grown produce, meats, dairy and other products, as well as with the arts community to showcase Indiana’s extremely talented performing artists.