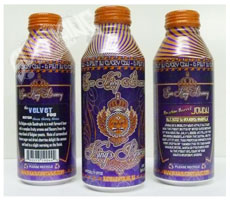 INDIANAPOLIS, IN – Sun King Brewing Company will release two beers in the new King’s Reserve can on January 28th. The King’s Reserve is a new 16 oz. resealable Alumi-Tek can that is manufactured by Ball Corporation in Monticello, IN. Sun King and Colorado’s Oskar Blues pioneered the use of this vessel last year with the release of Chaka and The Deuce.

Johan the Barleywine was the first batch of beer produced at Sun King on July 1, 2009, a small portion of which was placed in Bourbon barrels to age. This process imparts even more depth of character to the beer, allowing it to pick up flavor from the Bourbon as well as the oak. There are only 250 cans of Bourbon Barrel Johan available for $25.00 per can with a limit of one per person. Half of the allotment will be available for online reservations beginning January 21st at 12:00 PM (EST) and the other half will be available in the Tasting Room on January 28th. Online reservations will have one week to pick up their beer and whatever is not picked up will be made available to the general public on February 4th.

Batch 333: The Velvet Fog will also be released on January 28th and will be available in liquor stores throughout central Indiana, as well as at the brewery. The Velvet Fog is a Belgian-style Quadruple that was named one of Draft Magazine’s ‘Top 25 Beers of 2012’ in addition to the aforementioned World Beer Cup┬« Medal. Velvet Fog will be sold in two packs for a suggested retail of $17.50.

Sun King Brewing Company is the brainchild of Dave Colt and Clay Robinson. With the help of family and friends— Omar Robinson, Andy Fagg and Steve Koers—the first keg of Sun King beer rolled out the door for delivery in July 2009. Now available on tap and in cans at hundreds of locations around central Indiana, Sun King has grown into the second-largest beer brewer in the state of Indiana. The company’s commitment to handcrafted seasonal and specialty beers has been rewarded with multiple medals at the Indiana Brewers Cup, Great American Beer Festival and World Beer Cup competitions. Visit www.sunkingbrewing.com for more information.