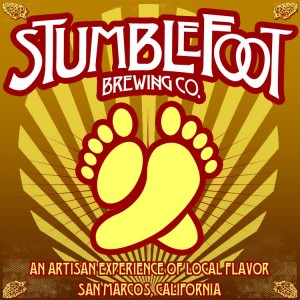 Stumblefoot Brewing had been self-distributing until now but has expanded from kegs into bottling the latter part of 2013. They have been anticipating its collaboration with the flourishing distribution company.

As quoted from Statewide Beverage Company,

“We are very proud to partner up with Stumblefoot Brewing Company. Bill and his team offer a number of outstanding, award winning beers that we are excited to introduce to the Southern California market. Their Pied a Terre Belgian Style Dubbel, Vixen Dunkelweizen, and Schwarz Black Lager are unique offerings that we feel will be a great treat for craft consumers.”

Stumblefoot originally consisted of a tight knit group of three family members: Bill Randolph, Pat Horton and Zack Horton. Founders of Stumblefoot, Bill and Pat began as home brewers in 2001. The name Stumblefoot pays tribute to the successes and failures they encountered on their venture of home brewing. Along their ambitious journey, the two “stumbled” upon some very promising opportunities that led them to where they are today.

With the support of the community, close friends and family the team has successfully established their brewing company. Aside from the original three, there are a few others that greatly contribute to the success of the company, including assistant brewers and cellarmen, Chris Sullivan and James Miller. Bill’s wife, Johanne, manages the website and various other back office tasks along with, Jessica Cunningham, who oversees the tasting room and their latest addition, Monique Golueke, their media and events coordinator.

A few of Stumblefoot’s award winning beers include: Schwarz be with you Black Lager, which won both a gold medal (2013) and a bronze medal (2012) at the San Diego County Fair International Beer Festival. Also at the event, the Moho American Stout took a gold medal in 2013 and the Vixen Dunkelweizen took a gold medal in 2012. Additionally, the Tommeknocker Belgian Style Dubbel won a bronze medal at the New York International Beer Festival in 2013.