The suspense is over. After months of speculation, Stone Brewing Co. has formally announced its intent to build a new brewery in Richmond, Va.

The San Diego-area brewery has signed a formal letter of intent with the city and plans to invest $74 million to construct a production brewery, packaging hall, restaurant and retail store.

Construction of the facility, which could be operational in late 2015, will occur in two phases, the company said in a press statement. A 200,000 sq. ft. production brewery — complete with a 250-barrel brewhouse and a distribution center — will sit on 14 acres of land and create 288 new jobs.

The search for a location had been ongoing since the company announced its intentions to build a facility, east of the Mississippi River, earlier this year. A number of states throughout the eastern half of the country submitted requests for proposal and subsequently launched campaigns to lure the brewery to town.

While some efforts were driven primarily on social media — through hashtags and, in some cases, music — others were sparked by efforts to enact legislative change. Most notably, South Carolina passed what became known colloquially as the “Stone Bill,” and lifted restrictions on breweries that operate on-site restaurants.

It’s the second major announcement the brewery has made this year. In July, Stone said it would expand overseas with the construction of a new brewery in Berlin. 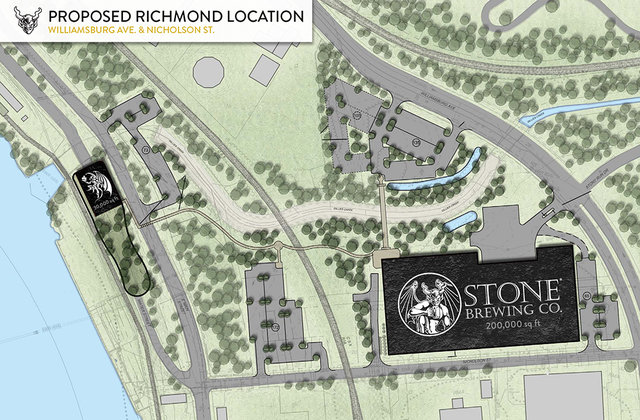 Additional details can be found in the release below.

ESCONDIDO, CA — Today, San Diego-based Stone Brewing Co. announced it has signed a formal letter of intent with the City of Richmond, Virginia, signifying the company’s interest in building its East Coast facility in the city’s Greater Fulton Community. Subject to local approvals, Stone plans to invest $74 million to construct a production brewery, packaging hall, destination restaurant, retail store and its administrative offices. Construction of the facilities will occur in phases. The brewery is anticipated to be operational in late 2015 or early 2016, with Stone Brewing World Bistro & Gardens opening a year or two after that. Ultimately, the company will employ more than 288 people.

“The search for our location east of the Mississippi River was no easy endeavor,” said Stone President and Co-founder Steve Wagner. “We received and reviewed hundreds of proposals, visited more than 40 sites, and received quite a bit of attention from communities and craft beer fans. The three finalist cities each provided diverse offerings, however, we decided to begin next-step negotiations with Richmond because of their ability to meet our extensive site requirements, subject to the city’s approval. We also feel that Richmond’s vibrant energy and impressive craft beer culture, along with the uniqueness of the property, will allow us to create a truly memorable Stone experience for our fans. We are honored by the amount of time and effort all the communities that submitted proposals put forth, and we want to specifically thank Virginia Governor Terry McAuliffe and Richmond Mayor Dwight C. Jones for welcoming us.”

Adds Stone CEO and Co-founder Greg Koch, “A facility on the East Coast will allow us to meet demand for our beer, ensure we are providing our fans with the freshest beer possible and also serve as a distribution hub for states located east of the Mississippi. We look forward to becoming an integral part of the lively craft beer community in Richmond, the state of Virginia and the entire eastern U.S.”

Stone anticipates building a 200,000 square-foot production brewery and distribution facility on 14 acres of land. Equipped with a 250-barrel brewhouse, the brewery will produce year-round and special-release beers to be bottled, kegged and distributed, as well as enjoyed on-site. The company also plans to renovate a two-story, 30,000 square-foot building, transforming it into a destination restaurant spanning four acres and highlighting locally grown organic food, complementing the harmonious nature and seasonality of the location’s surroundings. The restaurant will feature beautifully landscaped gardens where visitors will be able to enjoy craft beer, dine and relax in an inviting atmosphere.

“Today’s announcement marks the fruition of months of partnership and aggressive efforts to show Stone Brewing Co. that Virginia is the best state for its new craft beer production and hospitality facility,” said Virginia Governor Terry McAuliffe. “The company received submissions from more than 20 states, and the Commonwealth of Virginia was selected. This competitive, high-profile project really puts Virginia on the map and cements our standing as a serious player in the craft beer industry. In addition to Stone’s significant investment and more than 288 new jobs, the far-reaching economic benefits of this operation are innumerable. The City of Richmond offers the infrastructure, available site and building, and natural resources that will allow the company to thrive and grow, and we are confident that Stone will benefit from the Commonwealth’s excellent business environment for years to come. Today is an achievement of great magnitude, and we are excited to welcome Stone Brewing Co. to Virginia.”

“We are thrilled about Stone’s decision to choose Richmond as its East Coast production and distribution facility location,” said Richmond Mayor Dwight C. Jones. “After competing with 20 other states, we are so pleased that Stone has discovered those attributes that make Richmond a great place to do business. The fact that they have chosen a site in the Greater Fulton Community underscores their understanding of the rich history and natural assets that we have to offer. As they bring their unique craft beer and visionary business model here, I look forward to the many opportunities that lay ahead with Stone.”

This is the second expansion announcement Stone has made this year. In July, the company unveiled it will become the first American craft brewer to independently own and operate a brewery in Europe with the opening of Stone Brewing Co. — Berlin.