Stone Enjoy By 02.15.13 IPA features a massive hop profile of balanced bitterness and dryness, thanks in part to the 11 different hop varieties used throughout the brewing process. The “Enjoy By” date printed on each bottle reflects a 35-day package-to-consumption cycle, meaning that to fully experience the beer’s hop glory, it must be consumed by, or preferably well before, the end of the 35-day cycle. And Stone is making sure it will be! On February 16, if any beer remains on the shelf, it will be immediately removed.

“We continue to receive nothing but great feedback about Stone Enjoy By IPA,” Stone CEO and co-founder, Greg Koch said. “Our fans have spoken and they want beer that’s fresh and full of flavor. We’ve been able to continue to offer this devastatingly fresh IPA to fans that have requested the beer in their city, and we look forward to sending it to other markets in the future.”

Where can one locate this incredibly fresh beer? Visit stonebrewing.com/enjoyby/ and use the interactive map to find exactly which retailers, restaurants, and bars are carrying the beer in bottles or on draft in select states. If it looks like Stone Enjoy By 02.15.13 IPA isn’t at a nearby location, don’t fret. Stone will release rounds of this beer to other markets in the future.

Having released Stone Enjoy By IPA three times before, it’s no longer a freshness experiment — it’s a groundbreaking way to enjoy beer. A novel idea at first, this beer changes the way Stone and its distributors work together to get fresh beer out to the clamoring public. And the public is clamoring. Stone is measuring “buzz” for the beer through the company’s social media sites: Facebook, Twitter, Instagram, and the Stone Enjoy By IPA website. Based on the interactions, Stone has vowed to bring the beer to the locations that voice their interest the most.

Hopheads are encouraged to use the following hashtags on Twitter and Instagram to request the beer’s return to their city, or simply preach the sheer awesomeness of this fresh IPA: 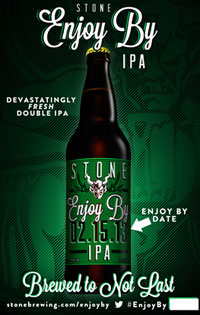 All engagements may be viewed in real time at the Stone Enjoy By IPA website, stonebrewing.com/enjoyby/.

Tasting Notes, provided by Brewmaster Mitch Steele
Appearance: Golden with a creamy white head
Aroma: Intense dank hoppiness, resin, peaches and hints of tropical fruit are all evident in the aroma.
Taste: Smooth malt up front, quickly dissipating into a massive onslaught of hops. The dankness and peach notes come through strongly.
Palate: Smooth with hints of alcohol, and a perfect balance of bitterness and dryness on the back end.
Overall: We took the opportunity with this beer to use several interesting techniques we’ve learned during our many years of brewing great double IPAs. The result is an intense dry beer with very little malt sweetness, but with plenty of malt flavor to provide a background to the enormous…or shall I say “ginormous” hop character. Hopping, as might be expected, was over the top. First, the brew was mash-hopped with Calypso, a beautiful fruity hop that we also used in our Stone 16th Anniversary IPA, after which we kettle-hopped with a very small dose of Super Galena hop extract for bittering. Then, using a technique known in homebrew circles as “hop bursting,” we loaded up very heavily on the flavor hops at the end of the boil and in the whirlpool. Simcoe, Delta, Target and Amarillo were used in the late kettle hop. Motueka, Citra, and Cascade were used for the whirlpool hop. As you can clearly tell, this beer was super hoppy even before we dry-hopped it, but then we went for it…dry-hopping with one pound per barrel EACH of New Zealand Nelson Sauvin and Australian Galaxy. Drink extra-super-dank-and-tasty Stone Enjoy By 02.15.13 IPA well before its 35-day shelf life to maximize the pungent glory that this beautiful, intense hop profile provides.

Twice named “All-Time Top Brewery on Planet Earth” by BeerAdvocate magazine, Stone Brewing Co. was founded in 1996 by Greg Koch and Steve Wagner and is the 11th largest craft brewer in the U.S. Headquartered in Escondido, CA, Stone owns and operates the farm-to-table restaurant Stone Brewing World Bistro & Gardens — Escondido, as well as Stone Catering, Stone Distributing, and Stone Farms. Other lofty ventures include construction of Stone Packaging Hall and a second restaurant with an on-site brewhouse, Stone Brewing World Bistro & Gardens — Liberty Station, both with an estimated completion of first quarter 2013, and Stone Hotel & Headquarters with an estimated completion of 2014. For more information, please visit stonebrewing.com or on social media sites: Twitter, Facebook, Instagram, Google+, YouTube, and The Stone Blog.