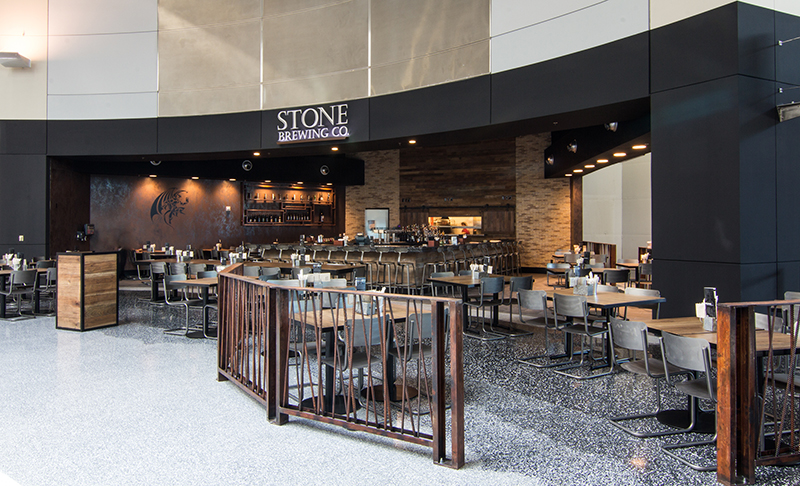 SAN DIEGO — Stone Brewing Co. is giving San Diego International Airport passengers a reason to actually enjoy going through security.The San Diego craft brewing company is pleased to announce that its bar and restaurant in the newly revamped Terminal 2 is open and greeting passengers from all around the world with artfully created craft beers. Enjoying a locally brewed beer before departing the world-famous San Diego craft brewing region adds new depth and meaning to the old adage, “Parting is such sweet sorrow” or gives rise to the new, apropos phrase, “Parting is bitter awesomeness.”
“I applaud the San Diego International Airport for supporting local businesses, and appreciate the opportunity for Stone to be included in the new terminal,” said Stone Brewing Co. CEO and Co-founder Greg Koch. “We look forward to providing travelers the opportunity to experience what the San Diego craft beer scene has to offer.”

The 2,500-square-foot bistro and bar seats 120 guests, and serves breakfast, lunch and dinner every day from 6am to 10pm. Ten Stone beers, including year-round and special releases, as well as two guest taps, are served from the 12-tap bar. For those wishing to enjoy a bottle on location or take it with them to their final destination, six bottled San Diego craft beer options are available for purchase. Stone’s signature motif has been recreated to include a granite bar top, repurposed vintage wood and a rust-patinaed rebar railing on the venue’s perimeter.

“Our new venue at the airport could not be more ideal; its prime location makes it the perfect spot to enjoy a delicious Stone beer,” said Stone Director of Hospitality Steve Robbins. “We are ecstatic about the opening and look forward to serving many hungry and thirsty travelers.”