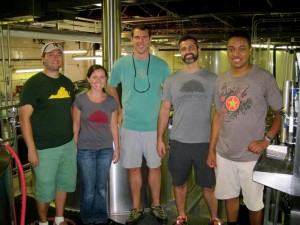 CHARLOTTESVILLE, VA—Starr Hill Brewery, one of the most award-winning craft breweries on the East Coast, and Hardywood Park Craft Brewery of Richmond, VA, are introducing a collaboration beer brewed specially for Richmond’s Fall Line Fest. This unique brew was named by a local fan in a contest run on Starr Hill’s Facebook page.

The collaboration beer will officially be called “Fall Line Fest Amped Up Ale,” as suggested by fan Page Hayes of Richmond, VA. The collaboration beer is a Farmhouse ale, dry-hopped with Sorachi Ace and Mandarina Bavaria hops and spiced with fresh local ginger. It will debut next week in the Starr Hill Tap Room.

“It is always great to work with Virginia brewers, especially when it involves new ingredients and new processes. One of the great things about the industry, especially in Virginia, is that we share ideas and process knowledge while maintaining our own unique way of doing things,” said Robbie O’Cain, Starr Hill’s Manager of Brewery Operations. “Brian Nelson and the brewing team at Hardywood did a great job with the pilot batch, which allowed us to hone in on the final recipe. We are excited to present this beer in collaboration with our good friends at Hardywood, and we hope Fall Line Fest patrons will enjoy this brew while listening to some awesome music.”

Featuring premier acts from all over the map, Fall Line Fest takes place on September 5th and 6th and is a volunteer-run festival located among the dynamic venues of Richmond, Virginia. Fall Line Fest Amped Up Ale will debut in the Starr Hill Brewery Tap Room on Friday, August 22nd, at the Fall Line Fest Happy Hour. It will be available for a very limited time at in the Tap Room and at the venues throughout Fall Line Fest.

“I think for us, collaborating with Starr Hill was probably long overdue. When the idea was proposed to create a beer together for Fall Line Fest, you could see and hear the excitement building as we all discussed what was possible,” said Brian Nelson, Hardywood Park’s Head Brewer. “In the end, I think we captured the brewing styles and concepts of both breweries in the Fall Line Fest Amped Up Ale. Cheers to Robbie O’Cain and the Starr Hill crew for helping to make this beer excellent—the only thing left to do now is bring on the music!”

Starr Hill Brewery was founded in 1999 by Mark Thompson and Kristin Dolan in Charlottesville, Virginia. Starr Hill is one of the most award-winning craft breweries on the East Coast, having won eight gold medals at such prestigious beer competitions as the World Beer Cup, Great American Beer Festival and Great British Beer Festival, along with 16 other medals, since its founding 14 years ago. The beer is distributed in nine states, including Virginia, Delaware, Georgia, Maryland, New Jersey, North Carolina, Pennsylvania, Tennessee, and Washington D.C. To learn more about Starr Hill Brewery, please visit www.StarrHill.com.

Hardywood Park Craft Brewery was founded in 2011 by two lifelong friends with a passion for craft beer. Hardywood Park is proud to be a member of the thriving craft beer scene in Richmond, VA. After two full years in business, Hardywood’s beers have earned a 2012 World Beer Cup medal, three Virginia Beer Cup medals, a 2013 Style Weekly Best in Show accolade, a 2013 Virginia Living Magazine Best of Virginia award, a perfect 100 score by Beer Advocate Magazine, and seven of its beers currently rank in the top 50 in the world for their respective style based on BeerAdvocate.com user reviews. The company was awarded the 2013 Greater Richmond Chamber of Commerce Business Council Business of the Year Award for the City of Richmond. Hardywood currently distributes in central, northern and western Virginia and Washington D.C. To learn more about Hardywood Park, please visit www.hardywood.com.