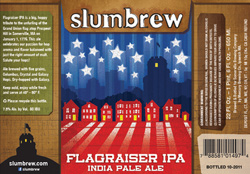 SOMERVILLE, MA – Adding to an already impressive line up of craft beer in the Chicago area, Slumbrew will kickoff its distribution in Chicagoland next week (January 24-27) with a series of promotional events and beer dinners. Slumbrew is the artisanal, ingredient-driven brand of unusual beers hailing from Somerville Brewing Company in Somerville, Massachusetts. The new brewery founded by Caitlin Jewell and Jeff Leiter just launched its first three beers in October of last year to an unanticipated level of demand and community support in its local market. 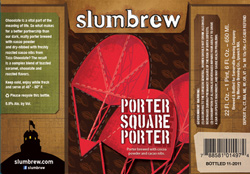 “Each beer we make focuses on how we can express one or more ingredients in a unique way to create an unusual finished product that is both delicious and differentiated from other beers in the market”,says Jeff who heads up the recipe development and brewing operations. The beers are conceived and perfected in a 350 sq. ft. nano-sized brewery that Jeff built in a small structure on his property in Somerville. After a long process of working out recipe details and sourcing the right ingredients, the beer is then scaled up and Jeff brews on larger equipment to produce the necessary volume for distribution.

The current set of beers offer something that appeal to a wide range of beer drinkers whether people prefer lighter color wheat beers, dark and robust porters or a balanced approach to big hop flavor. The next beer due to be released in early February is a uniquely formulated imperial cream ale called ‘My Better Half’. This beer is a nod to the style’s history of brewing with cereal grains and is split during fermentation so half is lagered and the other fermented as an ale. The two halves are then blended back together for packaging. There have been many cream ales brewed over the last hundred years, but rarely have they been brewed to an imperial strength of 7.2% ABV and with a focus on quality malts and adjuncts. Following after My Better Half in March, look for a higher gravity Belgian-style ale called Trekker Tripel brewed with some interesting sugars that take thef lavor down a different path. 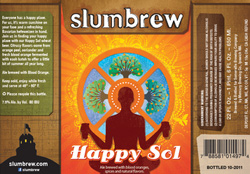 “We’re very excited to bring our portfolio of beers and approach to recipe development to the Chicago area. The beer drinkers in this area are incredibly discerning and we are in great company with some of the best publicans and brewers in the country all focused on making the craft beer movement matter”, says Caitlin who is the other owner and leads Somerville Brewing’s marketing, events and promotion activities. Slumbrew is also part of an admired portfolio of other beers distributed in Illinois through Stoller Wholesale.

The Slumbrew beers are currently available in 22 oz. bombers in many bottle shops around Chicago and some select draft lines, but the official launch and widespread release will coincide with special beer dinner and tasting events during January 24 -27. The first event on 1/24 is the ‘Slumbrew Rock & Roll Beer Dinner’ at Three Aces in Chicago from 7-9pm, followed by ‘Meet the Brewer’ events at Timothy O Toole’s in Gurnee on 1/25 (7-9pm) and Villain’s Bar and Grill on 1/26 (6-8pm) in Chicago.

To learn more about the Slumbrew beers or find bottle shop locations, visit www.slumbrew.com. Contact Caitlin at caitlin at slumbrew dot com for questions related to upcoming events and promotions. For distribution, contact Joe Katze at Stoller Wholesale (joek@stollerwholesale.com). The Slumbrew team hopes to see many Chicago craft beer enthusiasts at one of the upcoming events.