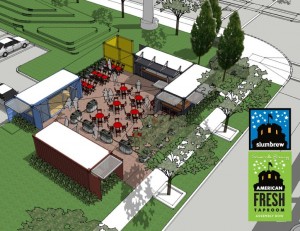 Operating under the name American Fresh Taproom, this new location will pair Slumbrew beers with fresh local food, sandwiches and charcuterie plates in a casual beer garden environment. SomBlox at Assembly Row is a collection of shipping containers that have been converted into retail and food prep spaces surrounding an open beer garden area to create a unique destination in the thriving new Assembly Row neighborhood.

“American Fresh, as a craft beer and food project, has been a dream we’ve had on the backburner for a long time. When asked by Federal Realty to bring Slumbrew and our American Fresh concept to this exciting new area of Somerville, we were thrilled with the opportunity. It’s an exciting time of growth for us.” said Jeff Leiter, co-founder of Somerville Brewing Company.

Located near LEGOLAND Discovery Center, the AMC Theater and Saks Fifth Avenue OFF 5TH, this outdoor location will introduce the American Fresh Taproom concept to a variety of guests. “We place a really high value on artisanal products so a lot of planning has gone into the selection of foods and planning the overall experience for our guests. Our food concept is based on working with artisan food suppliers, with an emphasis on local or regional products.” Leiter added. All of the food will be served on compostable dinnerware from Verterra. Food suppliers will rotate on a regular basis, but initially includes Fiore Di Nonno and Great Hill Creamery cheese, Olli and Creminelli Meats, When Pigs Fly Breads, Taza Chocolate, Grillo’s Pickles, soups and sandwiches and, for dessert, the Somerville tradition of a Fluffernutter treat.

“Our business has been growing rapidly over the past three years. We’re so excited about creating a place where people can get a Slumbrew in the fresh air and check out the new Assembly Row neighborhood. American Fresh Taproom will also host a number of art experiences from the local Somerville community. We’re especially grateful for this opportunity to bring a smaller, local business to the Assembly Row campus.” noted co-founder Caitlin Jewell. Jewell and Leiter are a husband and wife team that have co-owned and managed multiple businesses together for over sixteen years.

Somerville Brewing Company, Inc., the makers of Slumbrew craft ales, was started in 2011 by Jeff Leiter and Caitlin Jewell out of their Somerville, MA pilot brewery. All of the brewery’s beer recipes have been invented and tested in Somerville and developed for commercial production at Mercury Brewing, while business operations are also run out of Somerville. The company will open its own brewery and the American Fresh Taproom – Boynton Yards later in 2014, in addition to the Assembly Row location. Slumbrew’s core beers include Flagraiser IPA, Happy Sol, Porter Square Porter and Trekker Trippel. Slumbrew is available in 12 and 22 ounce bottles and on tap in six states. For more info please see: www.slumbrew.com |facebook.com/Slumbrew | Somerville Brewing Company, Inc., 1310 Broadway, Somerville MA 02144.