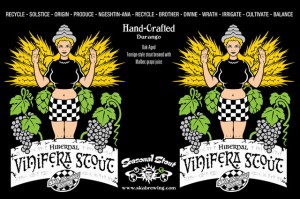 “Winter weather causes most of us to start craving heartier food, and beer is no exception. This beer is 8% Alcohol By Volume (ABV), and the Malbec grapes and oak aging will complement that with a richness and depth that are perfect for the winter season,” said Ska Brewing Overlord of Brewing Operations Bill Graham. “This will be a great beer to have during the cold, short days ahead.”

The packaging for the Hibernal Vinifera Stout, pictured below, features a black, 12-oz. can, with Ska’s True Blonde character as the Sumerian goddess of grapes and the cold season, Ngeshtin-ana. As with all four of the stouts in the Seasonal Stout series, the beer will be released in cans, and distributed in all of Ska’s markets.

According to Ska President and Co-founder Dave Thibodeau, Ska will complete the Seasonal Stout series with two more new, canned seasonal stouts in March and June of 2013. “The Hibernal Vinifera Stout follows on the heels of our Mayan-themed stout, and assuming the 12/21/12 calamity-howlers are wrong, we’ll all live to see its release. Come to think of it, we probably ought to name a beer ‘calamity-howler,’ in honor of all the crazy predictions that don’t come true.”

Based in Durango, Colorado, Ska Brewing was founded in 1995 and now produces over a dozen medal-winning beers including the Pinstripe Red Ale, True Blonde Ale and Steel Toe Stout. Four Ska beers are now widely available in cans: ESB Special Ale, True Blonde, Modus Hoperandi IPA and the winter seasonal Euphoria Pale Ale. For information, music and a good time, visit www.skabrewing.com. Chat us up and get the latest news at facebook.com/skabrew and twitter.com/skabrewing.