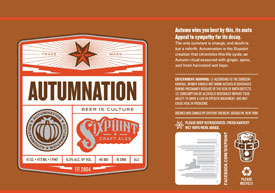 BROOKLYN, NY – Sixpoint Craft Ales has something brewing for the fall, in the form of their newest seasonal beer, Autumnation.

The brewery, which began canning their beers for the first time in May, is adding a pumpkin beer to the lineup for release in September.

This isn’t your ordinary pumpkin beer however. Canned pumpkin added directly to the boil is accompanied by fresh grated ginger, pepper and other spices. In addition, 800 pounds of fresh harvested Amarillo wet hops will be added to secondary fermentation.