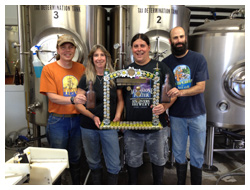 FORTUNA, CA – Six Rivers Brewery was hoping for a four-peat of the “Tasters Choice” award at this year’s Hops in Humboldt festival. They got it and much more.

For the third time, Six Rivers Brewery took home the “Best of Humboldt” award which is given to one local brewery by the judges. They also received the “Taster’s Choice” award for the fourth time in a row. The award is determined by event attendees. For the first time, they received the Tom Cooke Memorial Award, a tribune to Fortuna’s former mayor. The award is chosen by Fortuna’s current major and a panel of beer experts.

“We are very honored by these awards and the judges’ accolades for our beers. Of course, winning the Tasters Choice for the fourth time in a row is such a special thing because it is chosen by the people. These awards motivate us to keep surprising our fans with new and unexpected brews,” said Meredith Maier Ripley, co-owner of Six Rivers Brewery.