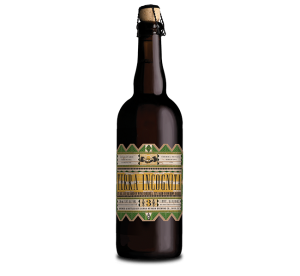 Chico, CA—Sierra Nevada Brewing Co. and Boulevard Brewing Company today announced that round three of their ever-evolving collaboration Terra Incognita will hit retail shelves late this month. First created in 2012 for SAVOR, a Brewers Association beer and food event, Terra Incognita proved too fun and flavorful a project to be a one-off. The beer, always a unique blend of fresh and aged ale, does not include the late addition of the wild yeast Brettanomyces this year.

“The base beer is a roasty, hopped-up brown ale that evolves in such interesting ways when it spends time in wine and whiskey barrels,” said Sierra Nevada Head Brewer Steve Dresler. “We hosted Boulevard at our Chico brewery and together tasted various blending ratios until we had a final beer that captivated us. We imagine craft beer drinkers will be similarly impressed.”

“Collaborating with Sierra Nevada on Terra Incognita the past three years has been a great experience,” said Steven Pauwels, Boulevard’s Brewmaster. “We learn from each other, laugh a lot, and the beer we’ve made has impressed my taste buds every time. This year is no exception.”

Terra Incognita celebrates and merges strengths of Sierra Nevada (savvy use of whole-cone hops) and Boulevard (barrel aging prowess). The beer’s name means “land unknown” and recalls the centuries old California Trail that connects the two breweries—an overland wagon trail across the western half of the US from Missouri river towns to what is now the state of California. This year’s final blend of Terra Incognita is a precise ratio: 55 percent wine barrel-aged ale, 32 percent bourbon barrel-aged ale, and 13 percent fresh ale. Sierra Nevada assertively hopped the brown ale before splitting it between red wine and bourbon barrels where it matured for 6 months, resulting in a 9.8% ABV blended beer whose earthy malt flavors are dressed in notes of tart fruit, vanilla and coconut.

The 750mL Terra Incognita bottles will make their way throughout Sierra Nevada’s nationwide distribution network, and craft drinkers can track down this collaboration and other Sierra Nevada beers using the brewery’s Beer Locator.

Boulevard Brewing Company has grown to become one of the largest specialty brewers in the Midwest, dedicated to the craft of producing fresh, flavorful beers using traditional ingredients and the best of both old and new brewing techniques. Boulevard beers are distributed in 25 states and the District of Columbia. For more information, visit www.boulevard.com, facebook.com/Boulevard, or follow the company on Twitter at twitter.com/Boulevard_Beer.