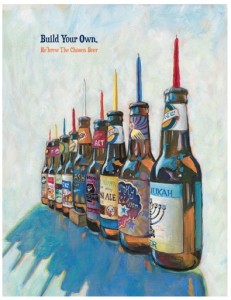 Clifton Park, NY — Light up the eight nights of Chanukah and all the holiday season with Shmaltz Brewing Company and select Chosen Bars from Coast to Coast! Each Chanukah bash will feature a very special array of Shmaltz’s current holiday releases, vintage seasonals and award-winning year round favorites.

Shmaltz Brewing Company will be entering the ring at the Brooklyn Battle Royale of Beer with Chanukah vs. Christmas events. Join us for the battle where everyone wins and gets their picture taken with Dirty Santa! The throwdown begins at Spuyten Duyvil (359 Metropolitan Ave, Williamsburg) on Sunday, December 21, 2014 from 1pm – 4pm with Shmaltz Brewing Company’s Chanukah Seasonals facing off against Christmas beers from Sly Fox Brewing Company and Iron Hill Brewery. The Battle Royale continues at Prospect Bar (545 5th Avenue, South Park Slope) on Tuesday, December 23, 2014 from 8pm until last call as Shmaltz faces off against Smuttynose Brewing Co.

Check out the Shmaltz Calendar for up-to-date information on the Chosen Bars and Chanukah vs. Christmas festivities.

Craft beer aficionados and holiday partygoers will have an opportunity to experience Shmaltz’s brand new Chanukah offerings. Join our extended tribe for a holiday bash happening in a city near you:

Additional venues may be added to the line-up of Chosen Bars so stay up-to-date on shmaltzbrewing.com.

Build Your Own Beer Menorah

Get in the spirit of the Holidays with the annual “Build Your Own Beer Menorah” national Facebook competition beginning with the release of the 5th Annual He’brew Gift Pack®, which is in stores now. The Gift Pack® includes 8 standout He’brew® beers, a custom glass, Chanukah candles and a hand-painted “Build Your Own” Beer Menorah (pictured above). Candles Won’t Be The Only Thing Getting Lit this holiday season! Images of your masterpiece can be added to Shmaltz’s Facebook page for a chance to win one of four chosen prizes.


Ranked in 2013 as one of the “Top 100 Brewers in the World” by RateBeer.com, Shmaltz won 9 Gold and 5 Silver Medals in the World Beer Championships in 2012. A recipient of the “Distinguished Business Award” by the Brooklyn Chamber of Commerce, Shmaltz was also included in the “Top 50 Fastest Growing Bay Area Companies” by San Francisco Business Times.

Founder and owner Jeremy Cowan established the company in San Francisco in 1996 with the first 100 cases of He’brew Beer® hand bottled and delivered throughout the Bay Area in his Grandmother’s Volvo. He’brew® now sells across 37 states, through 40 wholesalers and nearly 5,000 retailers. In 2007, Shmaltz released a new line of craft brewed lagers under the Coney Island® banner. The Coney Island brand was recently acquired by Alchemy and Science, a craft beer incubator, owned by Boston Beer (Sam Adams).