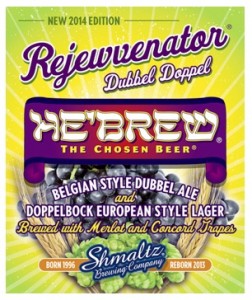 Clifton Park, NY –– Behold the ultimate West Coast/East Coast mashup and permanent member of Shmaltz Brewing’s seasonal mishpocha: REJEWVENATOR┬« 2014! Rejuvenate your taste buds with the sacred nectar of California Merlot and New York Concord grapes — both fruits infused to create a truly divine species. Inspired by the spiritual brewing traditions of the monks, and the cherished fruits of the Holy Land, this half Belgian-Style Dubbel Ale, half Doppelbock European Lager, is the only hybrid of its kind in the world. Like the mystical monks, the 8% alc. Dubbel-Doppel makes a clean, quiet entrance — before the dark fruit flavors crescendo into harmonious notes of creamy caramel. For a limited time, ancient traditions sing a modern tune in both 22 ounce bottles and draught at a store/bar near you.

The experimental process of brewing Rejewvenator┬« 2014 begins with 4 specialty malts and 4 hop varieties blending European tradition with brazenly innovative American craft beer flavor and attitude. Cold, bottom fermentation starts with the European Lager yeast, and once the beer warms, McErlean pitches the Abbey/Trappist Belgian Ale yeasts brought in exclusively for this brew. Finally the succulent juice of grapes is infused into the wort (beer) and ferments for several weeks before filtration and packaging. A delicious tribute to the original craft beer warriors, the Monks, and a fitting welcome to warmer days and the new life of Spring and Summer. L’Chaim!

Since 2008, Shmaltz has proudly released standout recipes of this genuinely unique brew, each blending diverse sacred fruits. The 2009 and 2010 (brewed with grapes) versions of Rejewvenator┬« took home two consecutive Gold Medals at the 2009/2010 World Beer Championships, and last year’s Rejewvenator┬« 2013 has a 91-rating on RateBeer.com.

Standout Praise for the Rejewvenator┬« Series:

About Shmaltz Brewing Company
Ranked in 2013 as one of the “Top 100 Brewers in the World” by RateBeer.com, Shmaltz won 9 Gold and 5 Silver Medals in the World Beer Championships in 2012. A recipient of the “Distinguished Business Award” by the Brooklyn Chamber of Commerce, Shmaltz was also included in the “Top 50 Fastest Growing Bay Area Companies” by San Francisco Business Times.