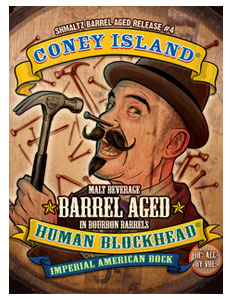 Weighing in at 10% ABV, this burly Imperial American Bock has aged over five months in first-use Buffalo Trace Kentucky Straight Bourbon Barrels. While Human Blockhead originally was conceived as a Tough-as-Nails strong lager, Barrel-Aged Human Blockhead is the evolution of a true professional, bearing the signature richness of Munich and Vienna malt but emerging from the barrel softened and silky, with hints of maple, caramel, and vanilla.

With approximately 500 cases produced, Barrel-Aged Human Blockhead is as rare and special as it is highly coveted.

The Limited Engagement Barrel-Aged series not only represents some of Shmaltz’s most decorated beers, but also boasts the highest consumer ratings from BeerAdvocate.com and RateBeer.com. The latter recently ranked Shmaltz Brewing as one of the “Top 100 Brewers in the World” for 2011. With the release of Barrel-Aged Human Blockhead, Shmaltz Brewing continues to design unique and sophisticated beers that can stand with the world’s best specialty beverages.

In a fusion of Old World brewing tradition with bold, flavor-driven American ingenuity, Coney Island Human Blockhead and Barrel-Aged Human Blockhead are examples of how Shmaltz has elevated lagers to the creative peaks ales have enjoyed in the American craft beer movement.

After selecting Coney Island Craft Lagers as “Best in Show” at their inaugural BevStar Awards, Beverage World Magazine noted that “in a segment largely dominated by ales… Shmaltz has demonstrated how creative one can be when pushing the limits of lager.”

The Chicago Tribune also praised Shmaltz’s artistic vision and pioneering spirit in a recent article, declaring that “the Coney Island series has put [Shmaltz] on the leading edge of craft lagers.”

Not surprisingly, Coney Island Human Blockhead has garnered top awards across the country since its debut in March 2009. In its first bout against other strong lagers at the 2009 United States Beer Tasting Championships, Human Blockhead took home the Gold Medal and then was designated the Bock/Doppelbock Grand Champion the following year at the World Beer Championships.

“As a kid, I always thought it would be cool to have an action figure made after me, but having a kickass beer is a whole lot better,” says the man behind the mustache.