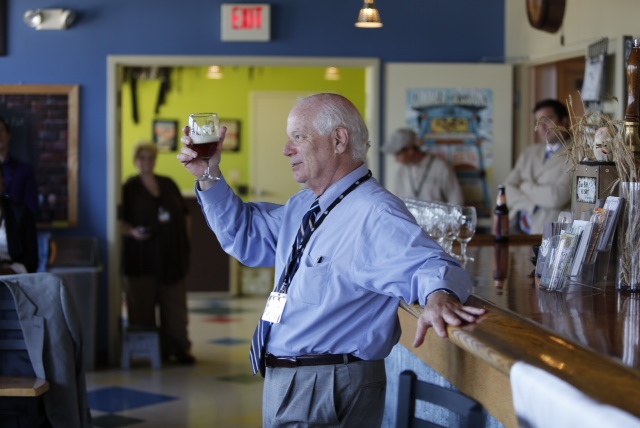 FREDERICK, Md. — With a homebrewer on his staff, U.S. Senator Ben Cardin (D-MD) said he thinks he drinks more craft beer than anyone else in the Senate.

And with a Doggie Style Pale Ale in hand, Sen. Cardin toured Flying Dog Brewery today as part of his “Made in Maryland” tour of companies that are supporting jobs in Maryland. After the tour, he hosted a roundtable discussion with Frederick County small business owners, including members of the Brewers Association of Maryland, in our taproom.

A member of the Senate Finance and Small Business committees, Sen. Cardin is also the sponsor of the Small Brewer Reinvestment and Expanding Workforce Act (Small BREW Act). The bill, co-sponsored by 26 other Senators from both parties, would reduce the excise tax on small brewers, which has not been updated since 1976.

“Maryland craft brewers like Flying Dog have become anchors of their communities,” Sen. Cardin said. “With quality and innovative products, they are creating jobs and reinvesting in their local communities. I believe that the Federal government needs to be investing in industries that invest in America and create real jobs here at home. With more than 2,400 small and independent breweries currently operating in the U.S., now is the time to take meaningful action to help them continue to grow.”

According to the Brewers Association, craft breweries, like Flying Dog, are small, independent businesses that employ almost 110,000 employees nationwide and generate more than $3 billion in wages and benefits per year. However, these breweries pay more than $2.3 billion per year in business, personal, and consumption taxes.

An economic impact study by Dr. John Friedman at Harvard University found that the Small BREW Act would generate $183.1 million in economic activity in the first year and create nearly 5,230 jobs nationwide.

Sen. Cardin emphasized that overall tax reform in the House of Representatives is necessary for the Small BREW Act to have a chance in the upcoming legislative session.