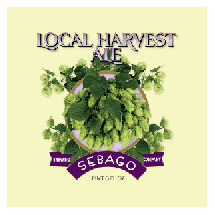 Local Harvest Ale (6.0% ABV, 36 IBUs) is brewed with hops and barley grown in Maine using the clear water of Sebago Lake. Local Harvest Ale is mahogany in color and has an intense aromatic bouquet of citrus, pine and lemongrass which comes from hopping this beer four ways: in the mash, in the kettle, steeped and dry hopped. This auburn Autumn classic is balanced with the careful addition of chocolate and caramel malts to create this extremely popular local beer.

Over 60 fans, friends, and staff of Sebago Brewing Company donated their time just after the hop harvest in late August for a hop-picking party — they picked over 150 pounds of hops to be used the next day! Local Harvest Ale is truly a labor of love.

Local Harvest Ale is a seasonal release, available through November on draft and in 4-packs at all Sebago Brewing Company locations. It will also be available on draft in bars, pubs, taverns, and restaurants, as well as in 4-packs at Hannaford & Shaws grocery stores and better beer retailers throughout New England.