UTICA, N.Y. — Longer days, melting snow, and birds chirping are telltale signs spring is around the corner, but they wouldn’t be complete without a few seasonal Saranac brews to thaw out with. The all new Saranac 12 Beers A SpringingÔäó variety package will be on shelves soon, including two new seasonal offerings: Saranac Red IPA and Saranac Dry Hop Lager. Brewed in limited quantities, these seasonal beers will be available beginning in late January.

The Saranac Red IPA is an IPA created to showcase the brewery’s ability to brew beers true to style, but with a fresh take. Brewed with dark English caramel malt, which gives it a deep amber color, this beer is a new twist on and IPA, one of the most popular craft beer categories today. After noticing the color, the hops quickly shine through. All innovative, U.S. bred and grown, aromatic varieties from the northwest were used to create this unique brew. Saranac Red IPA is available in the variety package, as well as in 6-packs, 12-packs and on draught. F.X. Matt released another innovative twist on IPA in early 2012 with their White IPA, a hybrid IPA and Belgian White brew.

“Red IPA is our next approach to creating an authentic combination of several characteristics of two different beer styles,” said Rich Michaels, product development manager for the F.X. Matt Brewery. “In this case we combined the most notable characteristics of IPAs and Red Ales: hops and toasted malts. The result-a nice spicy hop aroma and toasted toffee notes.” 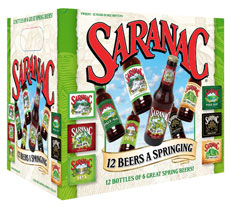 In addition to Red IPA, Saranac is introducing Dry Hop Lager, a traditional German Lager with an added hop aroma and flavor. Three hop varieties are used in the brew kettle, then, unlike in most lagers, the brew is dry hopped in aging with Opal and Taurus hops. Opal is a new variety know for it’s citrus and herbal characteristics and Taurus is know for it’s strong aromatic qualities. All varieties used are German hops-a tribute to the company’s strong German roots.

“We are excited to continue delivering new, unique beers all year, while still focusing on providing beer drinkers with their favorite flavors,” said Fred Matt, president of F.X. Matt Brewing Co. and fourth generation member of the Matt family. “Our goal is to maintain quality while offering something new each season. The Saranac 12 Beers A SpringingÔäó is a classic package with six distinctive varieties crafted perfectly for the end of winter leading into spring. Beer may be our craft, but enjoying it is yours!”

Having brewed beer for more than a century, the Matt Family knows what it takes to create distinctive and drinkable craft beers. Four generations of family brewers have worked to create a brand that offers an award-winning selection of core beers, along with seasonal offerings throughout the year. For more information on these and other Saranac flavors, visit www.Saranac.com.

Beer is our Craft. More than a slogan, it’s the brewing philosophy that the Matt family has lived by for four generations. It’s an expression of the pride and passion that goes into each and every ounce of their distinctive and drinkable beers. Located in the foothills of the Adirondacks, F.X. Matt Brewing Company — New York’s oldest brewery and second oldest family-owned brewery in the United States — has a long tradition of taking pride in what it makes. That’s how this family-owned brewery has quietly earned its reputation as one of the country’s most respected makers of specialty beverages. To learn more about its award-winning Saranac family of beers and soft drinks, visit the brewery’s website at www.saranac.com.