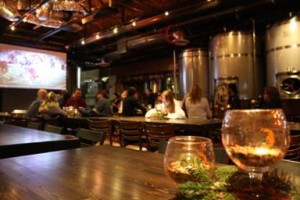 Chandler, Arizona — For the last six years craft beer lovers have flocked to SanTan Brewing Company in downtown Chandler to drink, eat, and celebrate special occasions. Now, SanTan is stepping up their game with the addition of the Brewers Reserve, a new private dining room & event space.

Guests will enjoy a very unique brewery experience in this 850 sq. ft. indoor/outdoor space set among the stainless steel brewing fermentation tanks. The room also features a large projection screen for presentations, your favorite sporting event, or private videos and slideshows. The Brewers Reserve room can accommodate a small intimate group or a party of up to 70 people — perfect for corporate events and rehearsal dinners!

Open since 2007 under the leadership of head brewer and owner, Anthony Canecchia, SanTan Brewing Company has established a strong reputation as one of Arizona’s favorite craft breweries. In addition to brewing, SanTan features a friendly neighborhood brewpub in Downtown Chandler, which has quickly become one of the top local food and beer destinations in the Phoenix metro area.

In 2009, SanTan Brewing began distributing their southwestern style ales throughout the state of Arizona, operating with a mission to pair craft beer with craft food that would inspire great conversation and good times. 2014 marks the beginning of taking this journey throughout the Southwest and California.