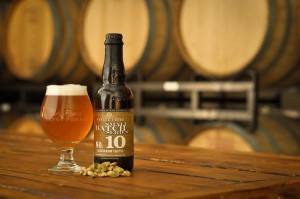 SAN ANTONIO, TX. — On November 21, 2010 Ranger Creek sold their first keg of beer. The historic keg was the first beer made in San Antonio that consumers could buy at a bar or restaurant since the 90’s. Four years later, San Antonio’s craft beer scene is thriving with new breweries, evolving laws, and a growing beer culture.

To celebrate their four year anniversary and the success of craft beer in their hometown, Ranger Creek is throwing a party. Their Four Year Anniversary Open House will take place on Saturday, December 13th from 2:00-6:00 pm and include live music, food trucks, and tappings of special beers. More information on the event is below.

One of the special beers that attendees will have the chance to enjoy is a brand new release called Small Batch Series No. 10. The 10th installment in their line of limited edition, esoteric beers is a Cardamom Tripel. It’s an 8% ABV Belgian beer style that was brewed with the addition of cardamom, which is an expensive spice that adds a unique character to the beer. Ranger Creek is releasing Small Batch Series No. 10 the same week as their Open House as part of the celebration. Only a few kegs of the beer exist, so look for special tappings in December in January, including the Open House. Wax-dipped bottles will retail for $5.49-5.99 and can be found at Central Market, select HEBs, Specs, Whole Foods, and fine independent beer stores.

“Ranger Creek has come a long way in four years, and it’s nice to reflect back on what we’ve done,” explains Mark McDavid, co-founder of Ranger Creek. “When we started, the craft beer scene in San Antonio was very small, and now we’re breaking into the mainstream,” McDavid continues. “It’s fun to be part of helping create and nurture a craft beer culture in the 7th largest city in the U.S.”

Ranger Creek is turning four years old, and you’re invited to come help celebrate! Special beers will be available for purchase, along with the standard lineup available to use with your tickets. It’s $10 for a souvenir Ranger Creek pint glass. If you wear a Ranger Creek shirt or bring your own Ranger Creek pint glass, you can get in for just $8. You’ll get 3 tickets to sample your choice of either 3 beers or 2 beers and a whiskey evaluation. You’ll also be able to purchase pints of special brewery-only beers, plus buy whiskey by the bottle (these bottles must remain unopened until you get home). Food will be available for purchase from two of our amazing local gourmet food trucks. Some seating will be available, but feel free to bring your own lawn chair. Please bring your ID and your willingness to hang out with your fellow San Antonians. Please also bring cash if possible, as this will help keep the lines manageable.