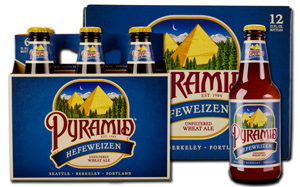 SEATTLE, WA – Earlier this year, Pyramid Breweries announced it would return its flagship Pyramid Hefeweizen beer back to its roots. Starting this week, consumers will begin to see the beer in market with a new look that better reflects the Pyramid heritage and tradition consumers grew to rely on and love in years past. In addition to Pyramid Hefe, Pyramid’s Apricot Ale and Thunderhead IPA also underwent a packaging facelift. 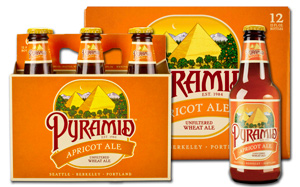 About the new design:

From pyramids as focal points, to font and overall tone, Pyramid’s goal was to stay true to its roots and help consumers to easily identify the beers they’ve loved for decades. New packaging highlights include:

“Consumers spoke and we listened. What makes our beer special is its authenticity, heritage and Pacific Northwest origin. It’s about telling a story that Pyramid offers a trusted craft beer experience every time. It’s about paying tribute to our roots. The new Pyramid packaging truly reflects that,” Daley said. 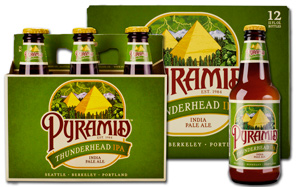 The new Pyramid packaging is just one of many exciting changes on the horizon for Pyramid Breweries. In 2012, consumers can expect to see several new and exciting brews, namely Pyramid Outburst, an Imperial IPA, which will become a year-round offering beginning in February. Its popularity as a seasonal beer was so high, Pyramid decided to expand Outburst, making it available to consumers throughout the year. Approximately 11 new beers will debut in total. Additionally, five Pyramid Alehouses in Seattle, WA; Portland, OR; Berkeley, CA; Sacramento, CA; and Walnut Creek, CA will be updated to give people an enhanced Pyramid brand experience.

“We know that continuous innovation is key for our craft beer consumers,” Daley said. “We’re looking forward to 2012 as we create more unique varieties and experiences for people to discover and enjoy our beers.”

Pyramid will apply the new look to all of its year-round beers, including six and 12-pack bottles, 22 oz. bottles and draught beer tap handles. Consumers can expect to see the new packaging roll out in mid-December for its Hefeweizen, Apricot Ale and Thunderhead IPA. View the new Pyramid Packaging here. Additional styles will transition to the new design in 2012. Visit Pyramid Breweries for more information or join the conversation at www.twitter.com/pyramidbrew or www.facebook.com/pyramidbrew.

Based in the Pacific Northwest, Pyramid Breweries, Inc. began as Hart Brewing in 1984 and launched the flagship brand of Pyramid Ales. In 1996, the company was reborn as Pyramid Breweries and currently offers craft beers produced under the Pyramid family of ales and lagers. With breweries in Seattle, WA, Portland, OR, and Berkeley, CA, Pyramid also owns Alehouses at all three locations and two additional Alehouses in Walnut Creek and Sacramento, CA. Pyramid brewers have earned 15 medals at the Great American Beer Festival (GABF), including the honor of Mid-size Brewery of the Year in 2008. The brewery also has been awarded seven medals in international competition at the World Beer Cup.
For more information about Pyramid Breweries visit, http://www.pyramidbrew.com/ or http://twitter.com/pyramidbrew.