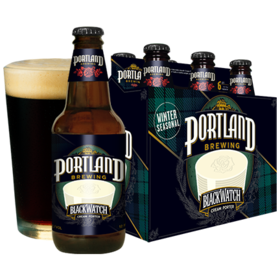 PORTLAND, Ore. — Portland Brewing rallies its forces with the return of BlackWatch Cream Porter, a smooth brew ready to lead the charge of porters for the cooler months ahead.

Much like the dark clad tartan worn by the Scottish battalion, BlackWatch’s dark complexion comes from Oats as well as Caramel, Black Roast and Wheat malts. Willamette and Northern Brewer hops lend a subtle bitterness to the porter at 27 IBU, and at 5.3% ABV, this porter works well as an after-work libation or as a nice beverage in the middle of a leisurely hike.

“We re-introduced BlackWatch last winter after it disappeared from shelves for a few years, and the response from craft beer drinkers upon its return was outstanding,” says Portland Brewing head brewer Ryan Pappe. “It’s crafted from a broad spectrum of flavored malts, including wheat, caramel and black malts, as well as roasted barley and oats. These malts combine into a smooth porter that goes down easily, leaving hints of sweet chocolate and roasted coffee, but doesn’t become syrupy or thick as some more aggressive porters do.” Read more about BlackWatch on the Portland Brewing blog.

Join Portland Brewing and other creatures of the night for some mischief, mayhem and dancing as they celebrate The BlackWatch Release Halloween Dance Party on Wednesday, Oct. 29 at the Portland Brewing Company Taproom from 6 p.m. to closing. Portland’s own DJ Wicked will be spinning classic party jams for guys and ghouls to rock the night away to. For more information, head to Portland Brewing’s Facebook event page.

Hurry though, before this porter plays its pipes & drums and marches back to the barracks — BlackWatch is only available until February 1, 2015. Find it in Oregon and Washington stores and bottle shops, as well as the Portland Brewing Company Taproom. BlackWatch is available in 22 oz. bottles, 12 oz. 6-packs and on draft. Find this and other Portland Brewing beers through the beer finder at http://www.portlandbrewing.com/finder/.

Founded in 1986 by craft brewing pioneers, Portland Brewing was a forerunner of the Portland craft beer movement. Driven by a love for brewing great beer for the people of Portland, Ore. and beyond, Portland Brewing is committed to delivering the best every time. From unique small batches, to seasonal brews and new year-round offerings, beer drinkers can expect variety, innovation, quality and great-tasting beer in 2014 from a company that, simply, brews with a passion for beer. Portland Brewing is located at 2730 NW 31st Ave., Portland, OR 97210. For more information about Portland Brewing Company, head to its website, Facebook and Twitter.