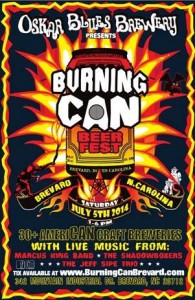 Brevard, NC – Oskar Blues Brewery is psyched to announce that the first East Coast Burning CAN Beer Fest will take place at the North Carolina Oskar Blues brewery in Brevard on July 5. Partial proceeds from the festival will benefit Western North Carolina Alliance.

Thirty-plus breweries that CAN will be pouring more than 100 different fresh craft brews from 1 to 6 p.m. Live music will start off with the guitar-driven blues of The Marcus King Band then segue into the rocking vocal harmonies of the charismatic Atlanta-based Shadowboxers. The day will culminate with a performance by hometown funky favorites The Jeff Sipe Trio.

Burning CAN will take place outside on the west side of the brewery and will also include local food offerings, such as beer-dunking homemade pretzel concoctions from Underground Baking Company, amazing delicacies from Little Bee Thai, and other food truck deliciousness.

Land of The Sky Mobile Canning will be operating on-site during the fest. Oskar Blues staff will offer several educational sessions, including a hops & grains class with brewers Noah Tuttle and John Silver, a tasting class with lab guy Dave Morris, and a Best of the Hops tour of participating breweries with Anne Fitten Glenn. Tours of the Oskar Blues brewery will be offered at 2, 3, 4 & 5 p.m. The Tasty Weasel will be open as normal from noon to 10 p.m. on the day of Burning CAN.

The Oskar Blues REEB Ranch-based Bike Farm will lead a bike ride to the festival from downtown Brevard, leaving the courthouse at noon, and picking up a crew of bikers at Lowe’s before heading to Oskar Blues. Sycamore Cycles will have a bike corral at the fest. A paddle trip down a short section of the French Broad River, led by WNC Alliance, will also finish at Burning CAN in time for all festivities.

The Festival originated three years ago in Lyons, Colorado, and will happen again there, in conjunction with Lyons Outdoor Games, on May 31, despite the flooding that devastated Lyons last September.

To kick off the inaugural Burning CAN weekend, Oskar Blues will offer a FREE concert with high-energy, party-inducing Charleston boys Sol Driven Train at the brewery on Friday, July 4. Music starts at 7 p.m., but beer will be pouring in the Tasty Weasel starting at noon on the Fourth.

Check out this video from the 2013 Lyons Burning CAN to get an idea of some of what may happen at the festival’s East Coast sibling.

Founded as a brewpub by Dale Katechis in 1997, Oskar Blues Brewery launched the original craft beer-in-a-can with Dale’s Pale Ale in 2002 using a tabletop machine that sealed one can at a time. In 2008, the makers of the top-selling pale ale in ColoRADo moved into a 35,000-square-foot facility in Longmont, ColoRADo. The brewery has since experienced explosive growth-packaging 59,000 barrels of beer in 2011 and 86,750 barrels in 2012. In December of 2012, Oskar Blues opened the doors to an additional brewery in Brevard, North Carolina. Together, the breweries packaged over 119,000 barrels of beer in 2013, distributing its trailblazing craft brews to 35 U.S. states.

For more than 30 years, the Western North Carolina Alliance has been a trusted community partner, marshaling grassroots support to keep our forests healthy, our air and water clean, and our communities vibrant. The Alliance focuses on a core set of issues-sensible land use, restoring public forests, and improving water quality-that have high impact on the environmental health and long-term prosperity of our region.