(COOPERSTOWN, NY) — The hottest news coming out of the Great American Beer Festival’s first session on Thursday, October 10 was the announcement of the third beer in the Game of Thrones-inspired series from Brewery Ommegang and HBO. 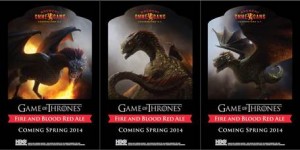 Fire and Blood Red Ale, inspired by House Targaryen, follows Iron Throne Blonde Ale (Spring 2013) and Take the Black Stout (available now). While the beer won’t be released until Spring 2014, a sneak peak of artwork incorporated in the label was revealed and will feature the three Targaryen dragons: Drogon, Rhaegal, and Viserion.

Unlike any other collaboration in beer realm history, Ommegang and HBO are creating smash hit after smash hit with this series. Iron Throne Blonde Ale set an Ommegang sales record as their fastest selling limited edition beer to date. Take the Black Stout is breaking that record and the third GoT-inspired brew is sure to take it a step further.

HBO Global Licensing officially licenses the HBO┬« brand for the development and merchandising of innovative product lines inspired by the network’s award-winning programming. With products created around classic series like the The Sopranos┬« and Sex and the City┬« to current hits like True Blood┬« and Game of Thrones┬«, items include fashion apparel, jewelry, digital and CD soundtracks, games, books as well as exclusive, premium collections in partnership with upscale, designer brands. Merchandise can be purchased in retail stores nationwide, at http://store.hbo.com, and at the groundbreaking HBO retail hub, the HBO Shop┬«, located at 42nd and 6th Avenue in New York City. HBO Licensing & Retail products are also sold internationally across Europe, Asia and Australia.

Nielsen CGA: Half of Consumers Unlikely to Return to On-Prem...