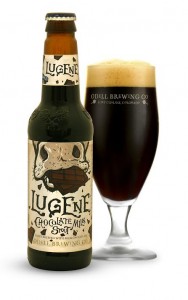 Named for the local dairy farmer that has hauled away the brewery’s spent grain for nearly two decades, Lugene is brewed with 250 pounds of chocolate per batch. The chocolate, a mixture of milk and dark, is added directly to the wort in the kettle where it melts into the boil. The result is a rich and creamy brew that drinks like a cold glass of chocolate milk.

Lugene was recently named one of the best new Colorado beers of 2013 by the Denver Westword. Editor Jonathan Shikes writes, “Lugene drinks like the best chocolate milk you’ve ever had — richer, creamier and with a smooth mouthfeel that belie its 8.5 percent ABV.”

The beer’s namesake, Lugene, uses the spent grain as feed for his dairy cows. Guests of the brewery may have seen Lugene’s beat-up old blue Chevy, which carries the grain to his small local dairy where it’s mixed with organic alfalfa hay, organic grass hay and silage to create complete feed for his very happy “girls.”

Odell Brewing will celebrate the return of Lugene in the Tap Room the weekend of January 25th. The brewery has partnered with another beloved local dairy, Cozy Cow, for the release. On Saturday January 25th, guests can sample Lugene beer floats with Cozy Cow ice cream (beginning at noon while supplies last). Then on Sunday, meet Lugene’s calves and enjoy live music by The Longest Day of the Year from 3:30-5:30 p.m. Local food truck favorite, Common Link, will be onsite both days.

Lugene Chocolate Milk Stout will be available in 4 packs and on draft through April within the brewery’s eleven state distribution footprint. To learn more about the story of Lugene, please visit the brewery’s blog.