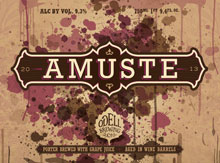 FORT COLLINS, CO. — On February 9, 2013 Odell Brewing will release its first Cellar Series offering of the year. Amuste, an imperial porter brewed with grape must and aged in red wine barrels, is the product of a two year project lead by the brewery’s QA/QC manager, Eli Kolodny.

“They say it takes a lot of good beer to make great wine,” said Kolodny. “After two years of research and development, I can honestly say that the opposite holds just as true.”

In an effort to marry the distinctive qualities of beer and wine, Odell brewers crafted a rich, robust imperial porter and accented it with juice from Tempranillo grapes grown on the Western Slope of Colorado. The brew was then aged in red wine barrels and blended to create a harmonic combination of malt and fruit.

Amuste boasts a hearty malt backbone with notes of chocolate, a subtle sweet grape character, and hints of toasted almond from the oak barrels. It pairs perfectly with peppered red meats, brie cheese, or dark chocolate.

Odell Brewing will celebrate the release of Amuste in the Tap Room on February 9th with live music and local food-truck pairings. Amuste will be available in 750 ml cork and cage finished bottles throughout the brewery’s ten state distribution footprint.