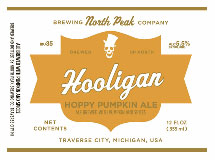 TRAVERSE CITY, MI — The shenanigans continue as North Peak Brewing Company announces the return of Hooligan — a hoppy 5.5 ABV/35 IBU pumpkin beer, just in time for the fall harvest season. For the first time, Hooligan makes is arrival not only on draft but also in the brand’s trademark 12-ounce stubby-bottle 6-packs.

“It’s no trick. This brew delivers all the spicy pumpkin goodness one could ask for, along with a kick of hops,” says brewer Ron Jeffries, who along with brewer Mike Hall bring a combined 40 years of brewing experience to their North Peak beer recipes. “Hooligan is brewed with real pumpkin and fresh spices (cinnamon, ginger, nutmeg and allspice, oh my). And, did we mentionÔÇªhops? Hooligan is brimming with locally-grown hops.”

So who is this Hooligan you may ask? He is a legendary and impish figure who appears but once a year on Devil’s Night, October 30 — the night before Halloween. He lurks through the darkness, traipsing in the shadows from house to house with a rogue gait and a devilish grin on his face. This scoundrel is more mischievous than wicked, yet his reputation for mayhem is wildly known. Anyone who has woken up on Halloween morning to find their pumpkins smashed or yard toilet-papered is familiar with the antics of the Northern Michigan Hooligan.

Hooligan is available now through October when the last pumpkin is smashed. Find it throughout Michigan and Ohio, wherever your favorite North Peak beer is sold.

The North Peak is part of Northern United Brewing Co., which also encompasses the Grizzly Peak and Jolly Pumpkin Artisan Ales craft beer brands, as well as the Civilized line of spirits and Bonafide Wines. NUBC’s philosophy focuses on a dedication to conservation, inspiration and locally sustainable practices. All of the beers and spirits under these brands are produced at either its 5600-square-foot facility on Old Mission Peninsula adjacent to Mission Table (former Bowers Harbor Inn) restaurant or at the original Jolly Pumpkin facility in Dexter.