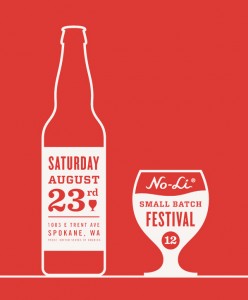 Spokane, WA — No-Li Brewhouse is hosting their second small batch festival (formerly named “No Boundaries on the River”), at their pub along the banks of the Spokane River, on August 23rd from 12-4pm.

The festival will feature twelve rare kegs from No-Li, including barrel-aged, experimental and infused beers.

No-Li’s first small batch festival, held in April of this year, sold out within 45 minutes of opening.

Tickets are now on sale (NoLi12.eventbrite.com); $20 in advance, $27 at the door (space permitting). No-Li strongly encourages guests to purchase their tickets early, as space is limited and tickets to their April festival sold out quickly.

No-Li will have a special food menu available that day, as well as live music from local bands, Buffalo Jones and Cursive Wires.

For more information about the event, please visit NoLi12.eventbrite.com.